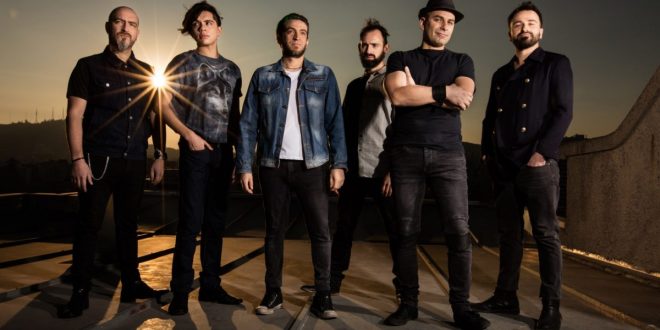 Walk on the hills of the craftsman, fly forbidden cliffs, by my side. New lead singer Israel Gil has taken the reigns of Chile’s progressive rock stalwarts, Aisles and it’s crystal clear from his first outing that in the two years the band took searching for Gil, it’s like no time at all has passed on the band’s chemistry and ambitious sound. “Smile of Tears”, an evocative piece of musical art, funnels the electronica-synth into an enigmatic kiln. Awe-inspiring, this new version successfully forges the band ahead into the next chapter.

Originally recorded on Aisles’ 2009 sophomore album, In Sudden Walks, “Smile of Tears” is an at times despondent echo chamber. Rather than feel elation or joy when Gil sings lines like, don’t smile, sharp’s your sword, hear the call of steel, the calm feeling, a subdued state emerges. There is a hypnotizing glow affixed to Gil’s voice. These words are later juxtaposed with the furthering of the invisible craftsman mentioned above: feel the inner will of this man, Gil sings. The song has a transfixing electro pattern, with a slight bass. A piano bed creeps its way, much like the clouds opening for the sunlight. Gil’s voice isn’t immediately bright, but the listener is left calmer, more enlightened. Don’t smile, don’t smile, the voice is tattooed to the listener.

I loved the idea of this song being about forcing a smile to someone we don’t like. It also comes across as song about depression and how the demons we battle on the inside, a sickening, always pulsating doubt, muddies up our thoughts. Hear the call of the steel meant to me to just get over, stand tall and push through. Feel the inner will of this man, to me, means to learn from others, glean from this person that you can get through and be genuine with your smile. Don’t get caught in the downward spiral, in the madness web. The backing music is astonishingly real, it’s almost tangible. Gil’s voice is the perfect match for the captivating sound.

Knowing the backstory of Gil coming to be the lead singer of Aisles also plays into that ‘inner will’ theme. In a wonderfully strange twist of fate, he loaded a video of a vocal performance on the music connection social media app, Vampr. Aisles were on the lookout for a new lead singer when original singer, Sebastián Vergara stepped down in October 2018. Guitarist Germán Vergara (Sebastián’s brother) discovered Gil, a classically trained musician and student at Music Theory at Pontificia Universidad Católica de Chile and the rest is history. Aisles was formed in 2001, in Santiago, where they are still based today. Aisle also includes guitarist Rodrigo Sepúlveda, drummer Felipe Candia, keyboardist (and synthesizer) Juan Pablo Gaete and Daniel Concha on bass. “Smile of Tears” redux will be included on the planned fifth studio album. As of now the plan is June 2021, and we can all hope they will provide many other sneak peaks and renditions as stirring as this one.