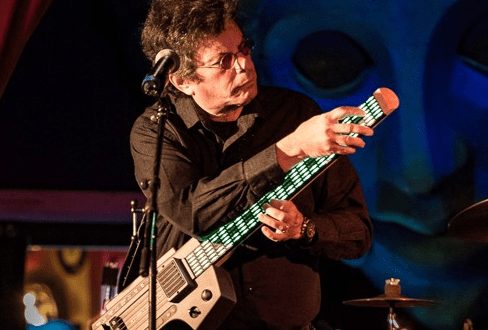 Part rock opera, a sliver of pop and a mild case of Electric Light Orchestra, the catchy “System Crash” from Les Fradkin is an unexpected sonic journey. Fradkin, a MIDI guitar pioneer, suspends the listener into his societal statement. Swirled into the hum-along melody is Fradkin’s quiet demeanor and assured sincerity. A flawed system and a loss of hope, “System Crash” through the lens of 2020 can feel like reality. Fradkin helps the listener suspend the moments, even if just to ponder.

An original inductee into the Television Music Producers Hall of Fame, Fradkin’s keen sense of movement and storytelling of the music bed is just half of the fun in “System Crash”. Sometime when we grow to know, gotta make a change, Fradkin sings. His voice is sweet, a hushed, modest soul. Leading up to his vocals, an elegant flute enters the room, electronic keys swarm the listener’s mind. The galloping undercurrent, the music bed gathers the gumption and Fradkin sings alongside a fluid, unfolding musical potpourri. Dainty at times, but the restlessness in the bump, bump percussion and blinding melodies even out the tone. It’s a fantastical music bed, bordering on opera or a movie score. Someday if it’s not too late, gotta find a way to a system update, Fradkin coos. The melodic guitar bridge is riveting, wailing away like an angelic vapor. The sound encompasses the scene, and as a listener, it made me feel weightless, suspended in mid-air. After the bridge he loops his vocals, adding even more fuel to the sing along tone. System fail Fradkin exclaims.

Fradkin, who starred as George Harrison in Broadway’s Beatlemania in the late 1970s, actually wrote “System Crash” with his wife, Loretta Fradkin, in 2003. The song is originally from his solo effort, Reality: The Rock Opera. It’s being unearthed again in Fradkin’s The Les Fradkin News. Knowing this track is 17 years old makes it all the more interesting. The pair penned it with the idea of America collapsing, an eerie tone considering the current state of affairs. “System Crash” is written from the perspective of an observer in the present, looking at events that are happening now and what might be the future’s case. Even if current events were not as so, there is a sense of wonderment and what if’s. It’s not science fiction, but it’s certainly a song that makes the listener think.

“System Crash” is poetic and grand, much like the industrial “Major Tom (Coming Home)” from Peter Schilling, and it also possesses the majestic build and harmony of Electric Light Orchestra. Fradkin is warm, his voice a warning call, is veiled in a modest presentation. He stays in his vocal stratosphere, leaving the varied octaves and ranges to the instrumentation. I’m confident fans of The Beatles, too, will share in the regard for “System Crash”. The song structure plays out like “A Day In The Life” with the piano change up and excitement. A true artist and possible clairvoyant, Fradkin composes a strong melodic element with a contemplative subject. “System Crash” is a musical reboot worthy of any decade.

Previous Single Review: See Your Shadow “My Worth”
Next Interview: PABST- Berlin based rock trio