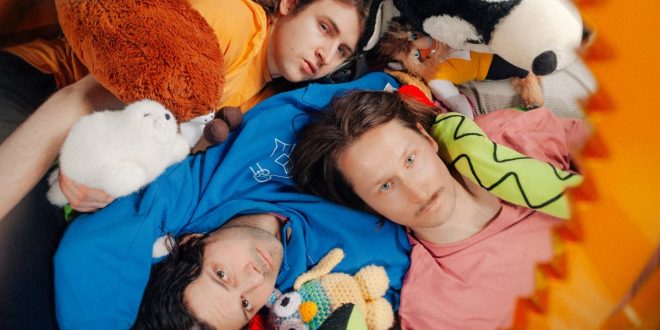 Last week we got the opportunity to catch up with Berlin-based band, Pabst, and discuss their latest record Deuce Ex Machine and their latest breakdowns of their songs. Check out Erik and Tore’s replies below!

⁃ In the past you’ve talked about how you recorded this record live as opposed to your ‘Chlorine’, which was tracked. How do you feel this changed the sound and impact of the record?

⁃ The vinyl cover of ‘Deuce Ex Machina’ featured stickers that fans could use to customize their album with it’s intended artwork. What made you decide to do this? And who is the artist behind the artwork?

Erik: We have been working with Fabian Bremer who’s been doing all of our covers so far and he had an idea with these drawings that he had found. They’re from a book where a guy collected commercial mascots and symbols. Most of them we couldn’t even find when we googled the brands! They may have been one-off things in the 70s or something and were put in this book. There were thousands of these drawings, so we used some of them and they looked like a sticker sheet already so it was the next logical step to do it for real.

⁃ You hosted a pop up shop for the record release in Berlin back in June. How important was it for you to connect with your fans in person after quarantine?

Erik: It was the whole idea to just do something outside again that’s more safe than a show. It was the day of our album release so we had been planning to play a show on that day, like every band does.

Tore: We had played a release show there before for our EP so it felt very familiar to us.

Erik: We’ve been doing some things there before, like we created a festival last Summer and invited other bands that we’re friends with, so it’s like a homebase for us if we have something like that. It was clear to us that we’d have something there.

⁃ At the moment you’re releasing a track-by-track breakdown of the record on your Youtube channel. Was this something you always intended to do, or were fans pushing for it?

Erik: That’s basically a thing where we thought that we could do something like that because we can’t tour. It’s something to pass the time and stay active. The album felt like it just came out and one week some people cared, then it just vanished. It’s something that took 2 years to make, so it’s kind of a big deal and then it’s out and we wanted to do something to show a bit of appreciation from our end and let people dive into the album a bit more.

Tore: It also was kind of because you normally feel the reaction from concerts and we just wanted to see what people think about it. We wanted the reaction so it seemed logical for us to do.

-How did you come up with the editing style of the videos and overall whimsical energy of your album promo?

Erik: There are a couple of ways that you can do these things. We’ve been watching some similar videos and you’re either watching someone talk that’s super charismatic, well-spoken, and interesting to listen to or, as in our case, they’re total beginners at talking to a camera. Sometimes it was a little bit slow and hard to watch so I cut out most of the stuff and replaced it with funny reactions to what we were saying to make it more entertaining instead of watching 3 guys awkwardly talking to a camera for half an hour. We’re also not the band where 100,000 people care about how we got a snare sound. One person might care but not so many, so we wanted to at least make it interesting for people who don’t care about the lyrics or how we wrote the song and just want to see a funny video.

⁃ I consider your music to be ‘Punk with Pop Sensibilities’ due to the classic sonic elements of punk rock mixed with more cheeky and catchy influences similar to pop. Do you feel this fits your music or do you not really subscribe to genres?

Erik: The first time we actually read a genre attached to our music was in the press-release for our first EP in 2016 and the guy said we were a grunge band. That was where the whole thing started for us but we never even considered that because we didn’t listen to grunge. It’s always interesting to see what kind of box other people put you into. We tried it ourselves and I think we can find a few micro-labels that just work for us, but I don’t mind if you think our music is pop punk or death metal. If it’s for you, then we don’t care.

Tore: It’s also sometimes funny to see the comments and what bands you’re compared to. A lot of bands I don’t know and I don’t see the connection, but OK!

⁃ As a band you’re very vocal about a lot of social and political issues in the world right now, including racism, gentrification, and drug abuse. Do you feel as though it’s your responsibility to be vocal about these things or does it just come naturally as you witness it?

Erik: Sometimes. There are some things that I feel I can write about and some that I don’t think would work. But still, we can at least use our social media presence to let people know where we stand or lead them to some type of information. It’s something that really started a few years ago where artists try to show their audience where they stand. I think that it’s pretty important because we don’t want people coming to our shows that have a super opposing world view to a point where it’s not compatible anymore, just because we didn’t say something. If an artist doesn’t share their opinions it’s most of the time because they don’t want to scare away part of their audience that won’t comply but we don’t need to do that. I think it’s important to show where you stand.

⁃ ‘Shake the Disease’ was released in 2018 but is more than accurate for the state of 2020. Did that take all of you by surprise?

Erik: I think it’s just because the lyrics are not about a specific place/time and it’s things that seem to always be there. Social/political issues like police brutality or neoliberalism, are things that have always been going on but have now been brought to the surface, especially this year. It was something we could distract ourselves from but not anymore. A lot of things just keep popping up and they seem obvious now, but they’re nothing new. Racism isn’t new, police brutality isn’t new, so it’s probably why the song seems so timely, but it’s just a stupid song about setting the world on fire.

-Do you have any last things you’d like to say to your fans outside of Germany?

Erik: We appreciate you caring for us! When this all blows over, we’d love to try and come over!