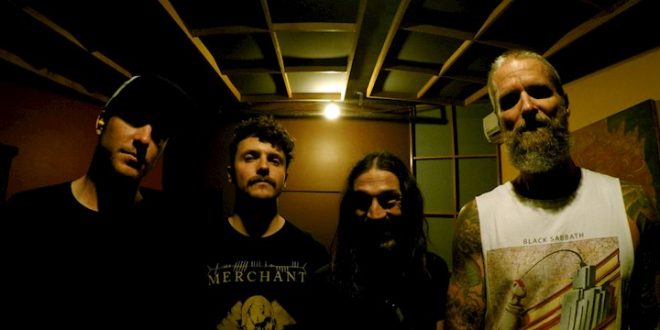 Australian Metal Band Yanomamo Release ‘No Sympathy For A Rat’

It’s well established that pretty much everything in Australia is trying to kill you. So too, apparently, are their heavy metal bands. This particular specimen, roaming the streets of Sydney, are dealers in pitch-black sludge metal. The name is Yanomamö, named after an indigenous Amazonian group known for ritual endocannibalism (which itself is metal enough), and after nine years of existence their sound has only expanded further into new territory, this is self-evident on their new release, No Sympathy for a Rat (proceeding one album, two singles, and three EPs).

A lot is packed in for a half-hour record. The four tracks drip with whiskey-soaked swagger and somehow blends the collective wisdom of Sabbath, Corrosion of Conformity, and Kylesa – the latter especially in the title track, where crushing heaviness collides with psychedelic groove. The bass filters through like treacle, especially on the Evil Dead 3-inspired “Miasma” (“I can smell your filthy soul!”, we are reminded), and gets a real workout as it thunders through the speakers. The riffs are similarly inspired, with an instant memorability that sets each song apart.

Jack Thomas makes his presence felt with every punch and kick in the crisp and organic drumming. As well as this, cymbal abuse riddles mid-paced thrasher “The Offering” – and the monstrous crashes that happen in the latter third of the song. Whatever is being offered as a sacrifice appears to satiate the recipient. Meanwhile, Scott Tabone roars and shrieks in layers, echoing strains of Neurosis’ rawness, highlighting the troubles of war on “Iron Crown” in one of the record’s most potent moments that – unfortunately – brings the whole thing to a close.

Australia may not be first on people’s minds for ear-decimating metal, but based on the strength of this kind of release it should be. If you aren’t listening to No Sympathy for a Rat, then where the bloody hell are you?

Track listing:
1. No Sympathy for a Rat

NewYork Based Photographer. Music Enthusiast with a background in Graphic Design. Whether I'm shooting a live event or just out wondering the streets its about capturing the moment.
Previous Avatar Release Bold New Album ‘Hunter Gatherer’
Next Steel Panther Announce 2 Drive-In Shows