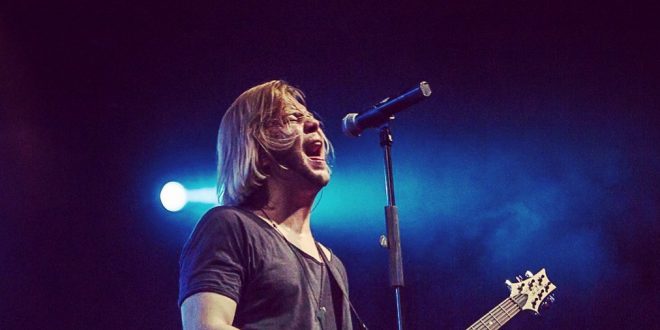 Lurching forward from the darkness like a wild animal that’s ready to come out of the shadows and take hold of its prey, Psycho Village’s “Unstoppable” is a creeping metallic wonder right from the start. It doesn’t make a difference where you leave the volume knob on this track, or, for that matter, its music video; its textured beats and the melodies they push out of the speakers are just too steeped in physicality for us to avoid their quake. Psycho Village aren’t about to deal with wallflowers here – they want to make us move, one way or another.

Though the beat is robust and consistently the most violent element in the track, there’s just as much brutality coming from the vocal/guitar harmony in a couple of key moments here. “Unstoppable” has the look and feel of a power-anthem designed for sporting events and feel-good turning points in feature film – there’s just something epic about its ascending melody that makes anyone listening want to get on their feet and throw their fist in the air. That’s a big deal for any rock group in 2020, regardless of their status within the underground hierarchy – or that of the mainstream, really.

“Unstoppable” delivers one crushing blow after another in less than four minutes’ time, but if you think it’s the only track on Psycho Village’s 2020 LP of the same name that has this kind of effect, you’d better think again. This band demonstrates a knack for getting nasty with their riffing whilst maintaining a melodic demeanor in their most recent offering, and something tells me that once rockers around the world get a sampling of its sonic depth, they’re going to remember Psycho Village from here on out. Big props to the group for their efforts, but serious hopes that this won’t be the last dispatch we hear from their camp.

Previous DEE SNIDER Reveals Music Video for Live Version of “For The Love Of Metal”
Next Single Review: JHelix “Baby Yellow (In a Dream)”