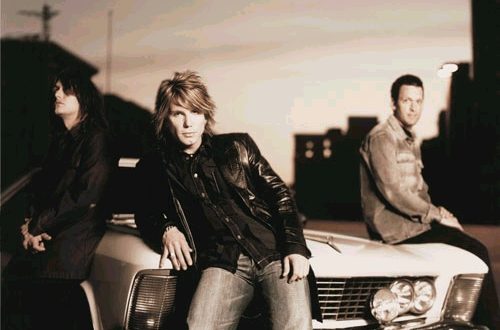 Multi-platinum, four-time GRAMMY-nominated rock band Goo Goo Dolls have announced they will release the deluxe edition of their acclaimed 12th studio record Miracle Pill on July 10th, 2020 via Warner Records. In addition to the smash title song “Miracle Pill” and the band’s latest single “Fearless“, the special album will deliver three never-before-heard tracks including “Just A Man,” a powerful & lush new song that was written and recorded in London with producers Martin Slattery and Antony Genn (The Hours).
“We recorded ‘Just A Man’ in London this past February right before we headed out on our UK tour,”said John Rzeznik. “It was really cool getting the chance to collaborate with Antony & Martin on it, and the song now feels more meaningful than ever in light of the past few months. It’s about the anxiety of existing as a human being in the 21st century and how we fight to overcome the ever-mounting struggles of being flawed in our nature and powerless in certain situations. It’s a call to stand up to the bullies in our own minds and the voices that keep us in the grip of fear. Fear and love, however, cannot exist in the same space. We need more compassion, more empathy, and certainly more love right now – not only for ourselves, but more importantly for others. We’re so excited to share ‘Just A Man’ with you and we hope you enjoy it.”
The band will be embarking on a 2021 North American summer tour to perform songs from the record, as well as other hits from across their iconic catalogue. Tickets are available now and a full list of dates can be found at the band’s website HERE. Pre-orders for the Miracle Pill Deluxe Edition are also available beginning today HERE and complete track-listing information can be found below.
MIRACLE PILL DELUXE EDITION TRACKLISTING
1. Indestructible
2. Fearless
3. Miracle Pill
4. Money, Fame & Fortune
5. Step In Line
6. Over You
7. Lights
8. Lost
9. Life’s A Message
10. Autumn Leaves
11. Think It Over
12. Tonight, Together *
13. The Right Track *
14. Just A Man *
*Bonus, previously unreleased track on the deluxe version
Initially released in September 2019, Miracle Pill remains as engaging and timely as ever. The album was described as “potentially the biggest Dolls album released to date [Planet Rock]“, as well as one that “easily stands alongside the best of their career [PopMatters].” In addition to “Fearless” and “Miracle Pill,” the record features numerous other instant-classics such as the stirring slow-burn “Autumn Leaves“. With over 30 years together as a group, over 12 million albums sold, and 14 number one and Top 10 hits at Hot AC, Miracle Pill finds Goo Goo Dolls at the top of their game and in a league of their own among rock bands.

NewYork Based Photographer. Music Enthusiast with a background in Graphic Design. Whether I'm shooting a live event or just out wondering the streets its about capturing the moment.
Previous The Venomous Pinks Reenact 70’s Horror Movie “Carrie” Frame By Frame in New Music Video “I Really Don’t Care”
Next Single Review: JamLive “Stay”