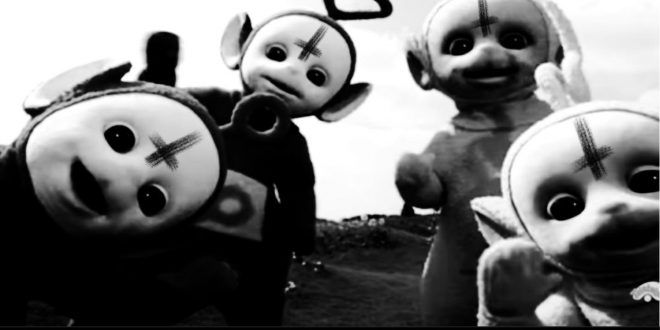 Portland punk band Teenage Mustache are back with their new album Bloodbath & Beyond! The album is a mix of old school punk rock n roll and modern Satanism.

“Bloodbath & Beyond was really inspired by three things coming together. I read the His Dark Materials Trilogy, saw the Satanic Temple documentary, and listened to the Twin Temple album a ton.”, says guitarist and vocalist King Rot , “It inspired me to shape our album thematically around Satanism. I hope when people listen to the album they will realize Satanism can be fun too. While we are sincere in our satanic messages we try not to take anything super seriously”.

King Rot and his band mates, Punkrock Nate on drums, and Gert B. Frobe on the bass, have all played in a number of Portland Area bands starting when they were teenagers before forming Teenage Mustache. They released their debut album, Portland State of Mind , in 2019.
The first single on the new album, ‘How About Today’ is a play on the old saying “Not Today Satan.” The second single, Satan’s Mustache, is a tale as old as time. “It’s just a typical love story, boy meets girl, boy falls for girl, and girl introduces boy to modern satanism.” says King Rot,  “Story starts out with how they met, how they fell in love and then how she introduces him to modern satanism.  The bridge represents them attending a black mass and his conversion to satanism.  Then things return to normal because satanism is normal.”
Bloodbath & Beyond features 12 pure punk rock n roll songs and enough backmasking to keep any Satanic teenager busy during quarantine. It is out now on all streaming platforms.