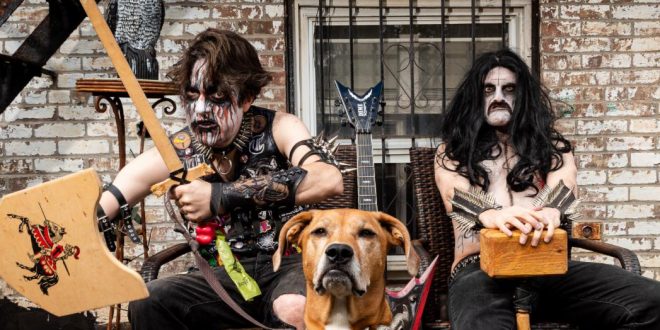 2
SHARES
FacebookTwitter
From the mean streets of Gary, Indiana by way of Oslo, Norway (or maybe the other way around – we’re not sure) comesWitch Taint, the most extremely extreme and Satanic Norwegian Black Metal band from Indiana ever (probably). Today the Taint releases their video for the track “Changes (a Little Less Time For Satan).” Watch the premiere courtesy of Metal Injection below:

“When we wrote ‘Changes (a Little Less Time for Satan),’ we knew we had written one of the greatest songs of all-time, but we had no idea we had also written an anthem for 2020 that will probably unite the whole world and stuff, which is awesome. Also, it’s the only song we know of to successfully rhyme “brutal” with “garbage removal,” so we’re pumped about that too. Hail Satan,” says co-founder and guitarist Lance the King of Black Metal.
Brought to fruition by the very unstable genius collective of Lance the King of Black Metal (rumored to actually be comedian and musician Dave Hill) and Matthias Backwards (rumored to actually be comedian and musician Phil Costello) Witch Taint’s full-length debut Sons of Midwestern Darkness is out now on on Tee Pee Records.
Order the album HERE

Sons of Midwestern Darkness Tracklisting:
1. Introduction
2. We Are Your New Gods
3. Interlude Black Metal VS, Death Metal
4. Death to Death Metal
5. Sons of Satan
6. Interlude Can one be Grim and Extreme
7. Changes
8. Viking Heaven
9. Ready for LVV
10. Are you Ready (To Black Metal)
11. Interlude Grimness of Noodles
12. Sons of Midwestern Darkness
13. The Dark Way
14. The Taint of the Witch
15. Conclusion
16. Gods of the North (Bonus Track)
17. Hall of the Witch (Bonus Track)
Don’t forget to check out The Witch Taint Extreme Talk Show, which continues with notable and extremely metal guests every Friday at 9pm ESTon Facebook.com/witchtaint.