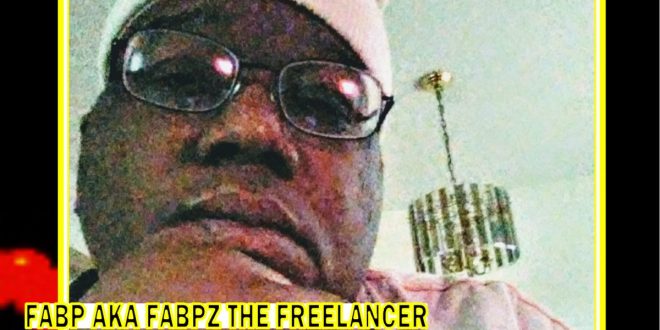 Fabp, also known as Fabpz the Freelancer, has released the album titled “The Devil’s Dream Dossier”. It features the songs “I’m Flashing I’m Bashing”, “Deal With She”, “Ms Fly Girl”, “Left To The Right”, “The Answer The Answer”, “Breaking News”, “Inside My Dossier”, “The Blacklist Ish”, “Life Of The Clash”, “Dolly Choose Me”, “If You Drink”, and “Have And To Beep”. The album is suitable for fans of old school hip-hop/rap music.

After listening to a few songs, listeners will be able to recognize that Fabpz the Freelancer has found his sound. “The Devil’s Dream Dossier” in general features many songs that feature heavy, deep-pitched bass accompanied by a laid back vocal style. Following this sound is a good idea, as Fabp’s voice blends in nicely with the bass.

One of the highlights of the album is “Deal With She”. Mainly, the play on words is notable in the chorus: “She no good/I want to deal with she”. While the grammatically correct line would replace “she” with “her” Fabp is likely aiming to make explicitly clear he is rapping about the same person. This demonstrates Fabp’s talent as a lyricist.

By mixing in quality production, beats, rapping style, and lyrics, Fabpz the Freelancer has made an album that many will enjoy hearing. It is certainly an effort Fabp should not regret making.

Stephen Vicino is the founder of MusicExistence.com. He created this site to give talented musicians a voice and a way to be discovered.
@@svicino
Previous Electro/Synthwave Act GIANT MONSTERS ON THE HORIZON Unleash New Studio Album – Live From Night City
Next EP Review: Susana Esono – My Baby