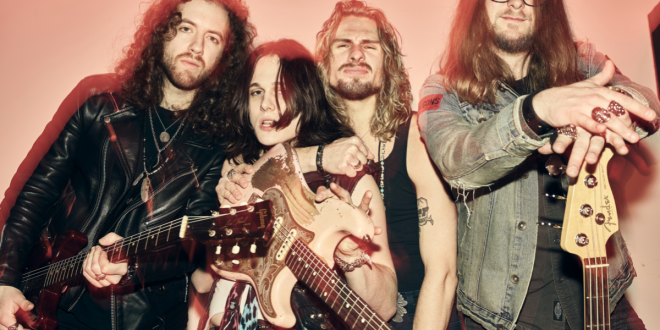 2
SHARES
FacebookTwitter
Tyler Bryant & The Shakedown have shared the video for the powerful song “Out There,” which takes on an entirely new meaning amid today‘s climate.

“Making sense of loss is not an easy task,” says the band’s namesake guitarist. “Sometimes, it’s just impossible. Songwriting has always been my way of tumbling through the feelings I struggle to make sense of. ‘Out There’ has taken on different meanings for me personally over time. Given the current circumstances, this song feels heavier to me than it ever has. I can only imagine what so many people are dealing with right now. There was a lot of love put into this song and I hope every bit of that is transferred and felt by anyone out there who needs it right now.”

The track appears on the band’s latest album Truth & Lies — out now via Snakefarm Records.ICYMI:
Listen to “Shock & Awe,” a gritty riff fest anchored by bluesy vocals, here.
Listen to “On to the Next,” which premiered at Guitar World, here.
Watch and listen to “Ride” here.

NewYork Based Photographer. Music Enthusiast with a background in Graphic Design. Whether I'm shooting a live event or just out wondering the streets its about capturing the moment.
Previous Beartooth Livestream Set For May 1
Next Elder Release New Album ‘Omens’