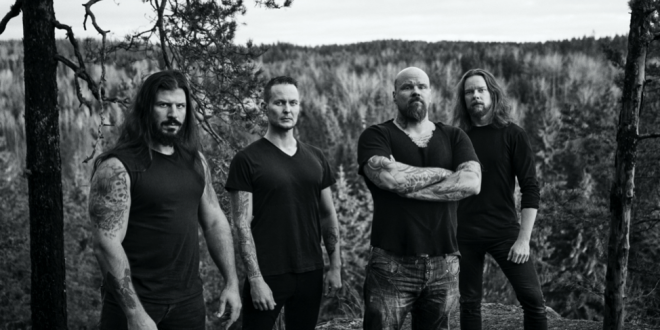 2
SHARES
FacebookTwitter
Finnish heavy melodic death metal unit Wolfheart recently announced the upcoming release of their new full-length Winter War epic, Wolves Of Karelia, out April 10, 2020 via Napalm Records.
Tuesday, April 7th, Wolfheart has revealed the unrelenting, heavy-hitting single “The Hammer”. A windmill-worthy intro is accented by sinister synth and marching percussion as the song switches effortlessly between black metal-inspired segments and melodic death metal riffage, closing with a somber acoustic passage. The video shows the band during the Wolves Of Karelia recording sessions with producer Saku Moilanen, giving fans an insider’s look at behind-the-scenes studio footage. The video was filmed by Valtteri Hirvonen and edited by Winternotes Production.
Wolfheart frontman Tuomas Saukkonen says about the track and video:
“‘The Hammer’ is the best song to describe the Finnish perseverance and willpower. ‘Never surrender, Never retreat, The last defender, The hammer of the north’. Those lines really underline the fact that no matter what the conditions were, the enemy had to be stopped. Nature was the anvil and you had to become a hammer, and between those two, no invading army could survive.
With the video we wanted to reflect the brotherhood in the band and the crew in contrast to the wrath of the lyrics.”
Watch the official music video for “The Hammer”below:

Wolfhearts‘s exclusive virtual concert experience will be revealed just two days from now! The performance was pre-recorded at the Finlandia Klubi in Lahti, Finland and will provide fans with an absolute rager of a concert without having to leave the comfort and safety of their own homes.
The purchase of a virtual ticket will grant access to a full HD pro-mixed multicam video of the entire set, a Q&A video and a bonus full gear overview video, to be delivered on April 9. To learn more and to purchase your “ticket” to this exclusive virtual Wolfheart concert, CLICK HERE.
Just as wildlife itself maintains harmony with a violent clash of beauty and unpredictability, Wolves Of Karelia explores the band’s previously coined genre of “winter metal” – smoothly bridging a traditional approach of extreme genres while maintaining atmospheric and acoustic elements.
Listen to previously-revealed forlorn ode “Ashes” HERE, and the pummeling epic “Hail of Steel” HERE.
The album’s lyrical and musical content is inspired by the Winter War waged between Russia and the band’s native country, Finland, which took place during the winter of November 1939-March 1940. Finland ultimately managed to stop the Russian troops from invading their country. WOLFHEART mastermind and frontman Tuomas Saukkonen was inspired by the personal stories of local veterans, conveying the tales of what they experienced and survived from their perspectives. Somber, frostbitten and heroic, Wolves Of Karelia portrays these tales with stunning musical precision.

NewYork Based Photographer. Music Enthusiast with a background in Graphic Design. Whether I'm shooting a live event or just out wondering the streets its about capturing the moment.
Previous Kvelertak “Live From Your Living Room” Livestream Set For 4/10
Next LA-Based Indie Label Wiretap Records Announces Month-Long Live Streams