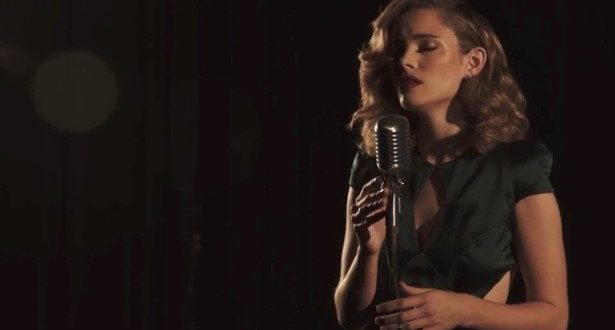 CYN shares festive cover of ““What Are You Doing New Year’s Eve?”

CYN returned with a new dose of music yesterday with a festive cover of the Frank Loesser-penned 1947 holiday classic, “What Are You Doing New Year’s Eve?” Shot in Los Angeles at the YouTube Space, the video sees CYN serving up pure elegance and old fashioned glamour—decked out in a gorgeous floor-length emerald green dress and clutching a vintage mic while bathed in a spotlight’s warm glow, green velvet curtains serving as the backdrop.

Originally recorded by Margaret Whiting in 1947, the song has been covered over the years by many of America’s greatest, including Ella Fitzgerald, Andy Williams, The Carpenters and Harry Connick Jr. Speaking about the inspiration for the new video, CYN reveals “I had a daydream about being in an emerald dress and singing this song— just all around classic vibes! I knew immediately August Getty would have a dress for me. I was envisioning Dorothy taking a pit stop off of the yellow brick road to sing a song to an audience that is never revealed, and thanks to my friend Remy Le Boeuf (who helped me with the instrumental arrangement) and my friends at YouTube, my daydream came true just in time for the holidays.”