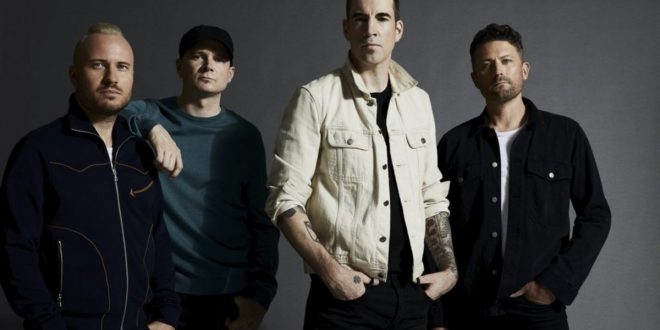 For close to two decades, Canada’s Theory of a Deadman solidified its stature as modern rock heavyweights, having accumulated both local and international multiplatinum sales on the strength of six albums and 36 singles thus far. Following the release of their 2017 album Wake Up Call, the Delta, British Columbia quartet shortened their name to Theory, and would subsequently shift from their signature rough-hewn post-grunge toward a cleaner, atmospheric pop sound. The band’s latest single release, “Strangers/History of Violence,” accentuates that change, and will serve as the respective middle and second tracks on their seventh full-length, Say Nothing, which is slated for January 31st, 2020.

I caught up with guitarist Dave Brenner to discuss the upcoming album, as well as what the band can take away from the extent of their stylistic evolution.

How was the tour?

The tour was great! We wrapped it up about a week ago. It was amazing; the last five shows were all sell outs, and we were out with a band called Spirit Animal. We love and adore their record.

That’s awesome. What do you look forward to about playing live these days?

For me, it’s the payoff of recording the record, doing press, and all these other things that are common in the music business. It really all goes back to being a music fan myself, you know? I still love going to shows, and there’s just something special about being part of a live show; it’s an experience you can’t otherwise get from simply watching a live clip on YouTube. It’s hard to put a finger on it, but I love the connections between the fans and the people who are performing.

I notice that even though not everyone’s a fan of your new sound, you still have a lot of dedicated support, and that’s what’s most important.

Yeah, and I know how they feel. When I was growing up, I was a fan of Stone Temple Pilots’ albums Core and Purple. As I got older, they started experimenting with many different styles, and a part of me always hoped that they would eventually make new material in the style of their earlier work. Those records meant so much to me and were reminiscent of a certain period in my life; I was going through high school and all that. The interesting thing is, you have this expectation that a band would somehow attempt to recreate the sensations of a particular period in your life. But it’s difficult for them to do that, because even if they tried that later on – say, if STP made a new album in the style of Core – it still wouldn’t totally suffice for me.

I think all we can do now, as a band, is to look toward our own path of evolution, rather than try to recreate what we’ve done in the past. Even for the people who think that that’s what they want from us, it still won’t work for them entirely. Normally, I don’t dwell too much on the reception, whether it’s positive or negative. If they like it, that’s great, and if they don’t, we’re just going to keep moving forward, because that’s what’s best for us.

Going further into your initial influences, was it a combination of Canadian and American music, or just anything you could get into in general?

Well, for me, growing up in Vancouver, it was a little different since we lived super close to the Seattle scene, and I was just graduating high school in the 90s. So, it was the Seattle grunge scene that really hit home – bands like Alice In Chains, Pearl Jam, and Soundgarden; that’s what pushed me. I honestly don’t think I was really aware of bands who were Canadian that directly influenced me. Looking back though, I’d say that I Mother Earth might have been one of them.

Then, you’ve got all those Hamilton, Ontario bands on Sonic Unyon, who are basically the Canadian version of Sub Pop.

Yup! it’s hilarious, right (laughs)? I love how you notice that.

Recently, you’ve transitioned your ideas from Wake Up Call into Say Nothing. What happened during that expansion period?

Tyler Connolly has always been our principal songwriter, and I think part of that style change happened when he bought a piano and started messing around with it. When you’re a guitar player for so long and you pick up a new instrument, it’s so funny how creative you can be. That thing kind of sparked a new sense of creativity into Tyler, and he immediately started working on demos. You know, once he started sending them over to us, he was very nervous at first just because of how different they sounded. As a band, all we can do with one another is be honest. We wouldn’t try to heavy it up on purpose, because that would be transparent; everyone would see right through that. To us, we should do what comes naturally, and I think we had reached a point of maturity almost – letting the songs be bare and a little more open.

With these new singles, “Strangers” and “History of Violence,” there’s a more involved, darker tone to the lyrics. Was that part of it as well?

Yeah, and I think with Tyler, that started with the single “Rx”. He’d stopped writing about relationships and wanted to focus more on social issues, like the opioid crisis that was striking at the time. It was cool to see fans come up to us after our shows and hear them talk about how much that song resonates with their own lives. It’s a heavy duty subject, but its inspiring that, the more we tour, the more our fans want to open up and talk about these things. There’s a big stigma about mental health, and we’re part of a generation who can change that. It’s weird how none of us grew up with our parents talking about mental health, but it’s courageous of Tyler to be tackling these kinds of subjects. It’s not an easy thing to do, so I’m proud that him. It’s important to be able to start these conversations, and sometimes, that’s all it takes. There’s definitely some darker stuff on this record, we’re excited for our fans to hear it!

We’ve both seen this time and time again – the uncertainty of ‘traditional’ rock music, as it’s being eclipsed by, or at least becoming more influenced by, atmospheric pop. What’s your opinion on this change overall, in terms of the more established bands working to fit into this modern genre scope?

It’s tricky, right? We’ve all grown up with the notion of music being timeless, and nowadays, it’s not; it has a very timely quality to it. Sometimes it’s based solely on the technology that was used at the time. I grew up listening to bands like Corrosion of Conformity and Pantera, and when I listen to their stuff now, I can kind of tell when it was recorded. What’s weird now is how that timely quality is more pronounced these days, and that’s just how it sounds. But I also think it’s important to adapt. I honestly don’t know what it takes, but I know we couldn’t try and keep pretending to be something from the past. I think we just need to keep being creative and embracing this new technology, and to practice our craft.

In terms of new technology, and embracing modern production, what was it like working with Martin Terefe on this album?

It was amazing! We worked with him before on Wake Up Call, and it was great to work with him again. He’s a ‘vibe’ guy, which is really different from what we’re used to, and wanted us all in the room together. He didn’t even want us to rehearse; he wanted us to be sloppy and to screw up, and he wanted to be involved, like, “Oh, how did ‘this’ or ‘that’ happen,” or, “What was that thing you did on drums just now?” and then he’d be like, “Here, let’s try that part there!” It was fun, and it made everyone be on a leveled playing field. We worked everything out until it felt right, and then we started recording it. It was such a cool way to make music. Everything just felt natural and we were kind of hooked on it after Wake Up Call, so it was really cool to be there and make these records in an organic fashion.

You mention the experience with Martin being new, and not what you’re used to. I get a sense that it was like going through growing pains, but in a healthy way.

I think so, and I feel that we were going through it when I listen back. You can still hear some sloppiness even in the final product, and its those imperfections that make the music what it is. In those moments where you work together through that uncomfortable feeling, that’s where the music truly shines.

As you’ve been going strong for almost two decades, what have you learned?

We’ve been doing this almost half of our lives. I still tell people that what we’ve really learned is to trust our intuition, and to recognize that there’s a real power in it. In the past, we’ve made decisions that were against our gut, and had them blow up in our face. We know that we have to practice trusting this gut instinct that pops up every now and then, and say, “Hey man, it’s there for a reason!” I think that’s the main thing we learned – listening to our gut instinct, because it’s telling us the truth.

It’s not easy to take for granted that we have this amazing job making music and being on the road. There’s an expectation from fans, and we want that expectation. Whether people love or hate our music, I’m complimented by it, because I know that it means something to them one way or another. We want our fans to be opinionated, but we also want them to grow with us, and we thank them for being part of this wild trip!

Theory of a Deadman Socials:

I come from a family who is passionate about all things music. I learned to sing at an early age, and by 13, had my very own Fender Strat guitar. I tried my hardest at learning all that I could. Because I was born with cerebral palsy, I had to teach myself an adaptive playing style. I learned to write and record my own music, despite these difficulties. In college, I started making great use of my writing abilities by reviewing music, as well as copy editing. I guess it's best to stick with what you know, while welcoming a fair challenge at the same time.
Previous Gallery: Boston Manor, Microwave, Heart Attack Man, Selfish Things at The Sinclair in Cambridge, MA (11.20.19)
Next Gallery: Liam Gallagher at Manchester Arena (20/11/2019)