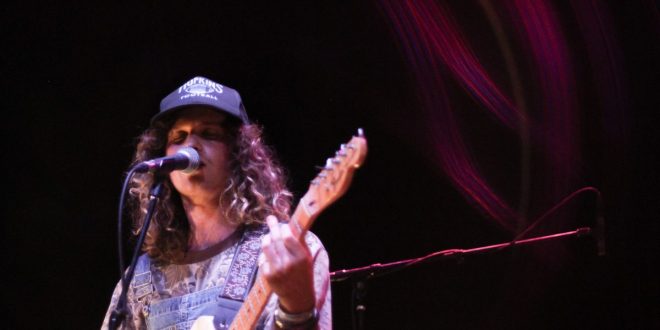 The road from Nashville to Los Angeles is a long one, but I’m sure it’s going to be one familiar to Briston Maroney in the near future. The 21 year-old headlined his first shows in Southern California last month to a response that was nothing short of explosive. We spent 2 nights with him and Slow Caves as they finished out their run together in the cities of Los Angeles and Santa Ana.

It wasn’t surprising to see the Moroccan Lounge full to the brim on a Saturday night, but the warm energy in the room was a bit of a shock. Despite the reputation of cold, crossed-armed onlookers in the city of angels, there was an irresistible fire brewing amongst the crowd as Maroney put tracks from his entire discography to use. Screams of “Play ‘Virginia’!” resonated in the room and bounced off the laughs of the artist himself in between each track, adding the friendly touch LA shows tend to lack nowadays. In the case of this tour, LA was the embers, which made Santa Ana the fire.

The most used phrase of the windy Santa Ana night was “How do you have that much energy?!”, and that summed the show up more than anything else. This bittersweet ending to a run of shows was topped off with a human tunnel (spearheaded by Slow Caves) as a send-off for Maroney and his band before they flew to Europe the very next day. With a mosh pit stirring for nearly every track, and a guitar wrecked by the end of the show, Orange County showed up and showed out in ways that LA could not. Higher energy demanded a longer set sprinkled with a generous amount of unreleased tracks and a few extra surprises as an encore.

With back to back US and European tours and music rolling out as this is being typed, the year winding down is only causing things to wind up for Briston Maroney- and we can’t wait to watch him as he’s let go and left to soar to the greatest of heights. The caring, kind, and genuine disposition that was found at these shows is drawing a growing crowd of passionate individuals who have just as much heart as Maroney’s music itself. Late November will welcome him back to the States, but in the meantime, check out his latest double single, “Miracle”, on all streaming services!