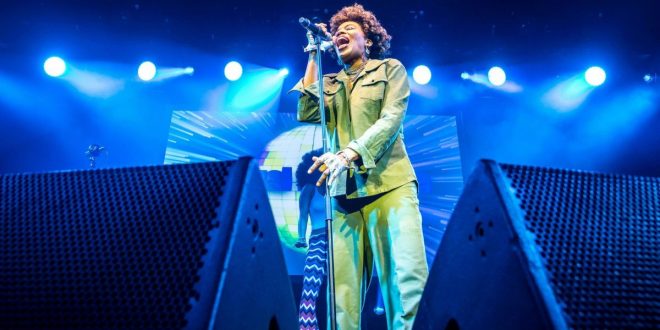 Interview: Macy Gray on her formative days, authenticity, and more

For over two decades, Macy Gray has left an unmistakable imprint on the world of neo-soul. Her signature raspy, yet smooth vocal tonality has defined such classics as “I Try,” “Sweet Baby,” and “First Time,” all of which would ultimately contribute to her amassing 25 million sales worldwide. Gray’s new single “Buddha,” off her tenth and latest album, the Johan Carlsson-produced Ruby, marks an exceptionally high point in her triumph over recent mental health struggles. Her work ethic consists of constant touring and recording, both of which she approaches with equal passion and dedication.

During a break in her tour, I had the pleasure of speaking with Macy about performing live, her formative days, the essence of authentic singing, as well as her current outlook on life.

ME: How has the tour been?

Macy: The tour’s over for now, and we’ve been home for a minute, but we normally go out for maybe two weeks at a time; altogether, it’s a lot. The shows are way up there, and all the crowds are sold out. It’s always fun going out on the road.

ME: While you’re performing shows, what do you notice about your crowds?

Macy: I see a lot of people around my age who have grown up with me and my albums. Some of them are married guys whose wives have dragged them into seeing my shows since I have a mostly female audience (laughs). But those couples also bring their kids – a lot of new, younger fans who I’ve never seen before. It’s a good mix!

ME: How I discovered you was through the game SSX Tricky, back in 2001, where you voiced the character Seeiah. I heard that was your first voice acting role.

Macy: Yeah! That was really fun, and I enjoyed it a lot. I wouldn’t call myself a real gamer, but I love video games in general. Just being able to play a character in a video game, that was a huge deal for me.

ME: Speaking of acting, you’ve been doing that for about as long as you’ve been singing. In your experience, do you see them as separate entities, or one and the same?

Macy: For me, recording music in the studio is more immediate; it centers around where your mind is at currently, whether or not you’re happy to be there, and all that you’ve ended up writing about. When it comes to acting, though, especially in movies, I find that it’s very calculated – much more planning, skill, and talent involved, and having to deal with a huge camera crew, so I think they’re completely different.

ME: As you pursued music initially, which influences helped shape your singing voice?

Macy: When I was younger, I listened to so much music, and it’s tough to pick out just one artist who inspired me. At that time, I was really influenced by Aretha Franklin. I’m a huge fan and have a lot of respect for her – what she can do with her voice, and what she’s accomplished in life. That’s kind of what I strive for, even though I don’t know if I’ll get to that level since she was such a phenomenon (laughs). I listened to jazz growing up, and that’s why there’s a lot of that influence in my music. I was also brought up on rock and roll, and that’s how I learned how to scream. Rock and roll teaches you a lot about phrasing. A lot of those guys back then weren’t great technical singers with big gospel voices, like Aretha was, but they were a lot more about attitude, you know what I mean, guys like Jim Morrison. I like Prince, too, because he can go from really low bass to a high falsetto, so I was really focused on that a lot of the time. There was also hip-hop; that’s where you learn a lot about rhythm – focusing on the drums and bass beats while you sing. And I’ve had a vocal coach to help me out with all of that.

ME: It’s a really distinctive blend of influences – a little bit of rock, funk, and soul. In fact, those qualities really come together in your latest single, “Buddha,” which has Gary Clark Jr on it. How did you guys get together?

Macy: Well, I met him at the Afropunk festival in Brooklyn in 2017. We’d talked about doing a record together at the time, and once I’d worked on Ruby with Johan Carlsson, who produced the record, we wanted a guitar solo for one of the songs. I reached out to him, and he did it. We weren’t in the same studio, though. I met up with him a couple of times since then, but he’d actually recorded it in San Bernadino. That’s how it is these days – everyone records at their house (laughs).

ME: Ah, I see. Even though you weren’t working together directly in the same space, there’s still solid chemistry regardless.

ME: With the song’s video, what did you go for in its concept?

Macy: The video plays like a run-through of my life so far, with a bunch of stories going on at the same time. I think Teyana Taylor captured that nicely. She did a great job and I’m really proud of it.

ME: Going back a bit, when transitioning from the Stripped album, Ruby was kind of like your return to form, in a way. How did that album come about?

Macy: I really just wanted to start fresh. The original concept for Ruby was “Nina Simone 2020,” which Johan came up with once we met up. Then, we just sort of ran with that. It was more like [combining] the beats of today – the heavy drums and bass lines – with classic melodies and sounds overtop. I don’t know if we fully accomplished that, but it definitely sounds just like a Macy Gray album. It’s like all projects go – when you think them up, you need some kind of starting point, so that’s how it happened.

ME: In July, you guested on an episode of Real Housewives of Potomac. When you were in the studio with Ravyn, you told her, “Don’t think, just sing.” Did you always have that level of confidence when it came to recording vocals, or was that something you’d develop over time?

Macy: Back then, that was the only way I could do it. In those early days, I didn’t consider myself a singer; I just did it for fun, without thinking about using any techniques, and it’s been that way ever since. I’ve definitely had training over time, though, and have gotten more familiar with the science of singing, how my voice works, and all that. But because I started without that at first, it’s kind of the only way I’ve known. I mean, I know there are some singers who pay attention to designing their adlibs and picking out very specific notes to sing in their melodies, but I can’t even imagine what goes into that.

Either way, I think anyone can understand when a singer is really feeling it – when they’re in the zone, and they’re not purposefully trying to impress anyone with their vocals. They’re not conscious of it; it’s a complete release, even if, technically, it doesn’t sound all that great (laughs). So, yeah, when it comes to singing, that’s my advice.

ME: With that in mind, was that how your signature singing voice just happened to come out?

Macy: Yeah! Like I mentioned before, it’s from listening to all types of music, even to this day. It’s when you sing for real – when you mean what you sing. That’s what makes you a real singer.

ME: At this time, will you focus primarily on touring, or recording a Ruby follow-up?

Macy: I’m always writing, and I’m actually going into the studio really soon. That’s what I know, and what comes naturally to me, so no matter what, I’m always going to be making music. Touring is a part of that, and it’s something I love to do, but it kind of goes hand-in-hand, you know? Like when you’re a janitor; you mop the floors, but you also take the trash out. You focus on both equally at the same time.

ME: When you put your career in perspective, do you notice how much you’ve grown, both as a musician, and as a person?

Macy: You know, I don’t really think about that as much as I should. I know that I’m supposed to at this point. I’ve definitely been through a lot, and I’ve gotten therapy for that. But to take a moment to really step outside myself, notice these changes, and figure out who I am, it feels kind of weird. You just ‘go,’ you know what I mean? You get up in the morning, do your thing, and learn along the way.

ME: You live, in other words.

Macy: Yeah! That’s what works best for me.

Macy: Thanks for being awesome, and I’m going to keep making great music for all of you. I hope you love the new album and the new single!

I come from a family who is passionate about all things music. I learned to sing at an early age, and by 13, had my very own Fender Strat guitar. I tried my hardest at learning all that I could. Because I was born with cerebral palsy, I had to teach myself an adaptive playing style. I learned to write and record my own music, despite these difficulties. In college, I started making great use of my writing abilities by reviewing music, as well as copy editing. I guess it's best to stick with what you know, while welcoming a fair challenge at the same time.
Previous Inhaler share official music video for new single “Ice Cream Sundae”
Next Lauren Daigle announces headline world arena tour