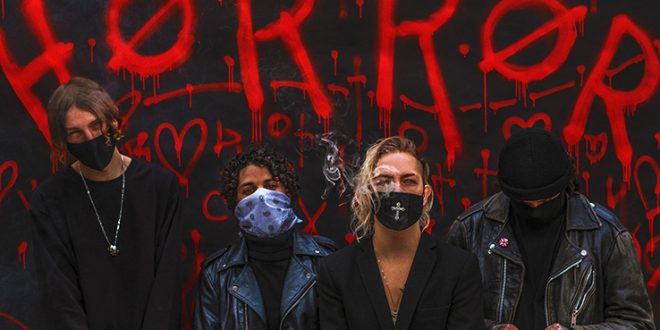 The Hunna have been stuck in quite the ordeal over the last year with postponed tour dates and other legal complications out of their control but since then, the boys left record label High Time and are now back in the fast lane for success.

The band are currently embarking on a US tour supporting Barns Courtney. I had the opportunity to chat with the band before their show in Chicago and this is how it went down.

You too, man. Yeah sick ! We obviously got here a few days ago, so just getting over the jet lag, but we had a really good show last night in Minneapolis to start it off.

I’m sure that’s a sign of what’s to come on for the next few weeks!

Yeah definitely! We had a good crowd and really enjoyed it.

Awesome. You played Reading & Leeds main stage for the first time this year. How was that one for you?

Reading and Leeds were amazing. It was just a really big milestone for us to hit the main stage for the first time.

I can only assume that the difference between that and playing the Festival Republic stage a few years back was crazy!

We had such a blast, it really was amazing and the sun was shining so all round, it was amazing.

Well what more can you ask for, for a festival.

Yeah, we really can’t have asked for much more than that. We’d love to headline it one day.

Hey maybe two or three years and we’ll be seeing it! You played your fair share of festivals over the summer, what were your favorites?

Yeah well obviously Reading and Leeds was the top of the list for us. Community festival was awesome as well. Benicàssim was a big one for us too, as it was our first time playing that festival. Y Not was really cool as well as Neighbourhood. So yeah, it’s been a really fun summer and it’s been nice to just get back up there and play for these people, as well as playing a couple of new tracks too; so all around it’s been a pretty good summer.

So does this make Reading & Leeds the biggest crowd you guys have ever played too?

I think it is now yeah, Community was the biggest originally and that was massive, but Reading topped it for sure.

Awesome. So you posted on your socials about a new music video for ‘I Get High To Forget You’, can you say anything about it?

Yeah sure! Just before we flew out to the states, we shot it with our good friend Haris Nukem, who we’ve worked with for a long time. I can’t really give too much away but we have some up close playing with a cool set with dancing and we had some fans come down and mosh with us and we had a riot squad! But it was really good fun and we’re excited to see it! But I think its definitely going to be our sickest video to date.

I’m assuming that there isn’t a release date set for this yet then?

We don’t yet, obviously the single is already out but it’ll be pretty soon!

Sick! So what about the new album? You’re jumping in the studio next month, I believe. So how do you feel going into that?

Really excited man! It’s sick to be recording somewhere other than England, so LA of all places makes us really excited for it.

Recording in LA must be the dream!

Oh yeah definitely. We’ll be recording with the front man of Goldfinger too!

John Feldmann is just a legend.

He is isn’t he! So we’re really stoked to be doing that with him and lay everything down and then we’ll be coming back home and looking forward to releasing it around early Spring next year.

So is the new track, anything to go by in terms of sound for this upcoming album?

Yeah for sure! There’s definitely that pop element in with the rock. So ‘I Get High’ is definitely a taster of what’s to come. But there’s going to be a lot more flavours going on. There’s areas where we’re probably going to go heavier than we have before, with even some R’n’B in a few areas as well. We’ve got such a wide range this time! There were a lot of influences going into it.

Sounds like you guys don’t really want to be pigeon holed as an Alt-Rock band any more.

Definitely – We’re all big fans of all genres and the range that we listen to is huge really. We’ve always been very open minded and that will continue and its good to try new things out and experiment, so if it works then it works but if it doesn’t then it doesn’t you know?

For sure! It must be nice to be able to spread your wings now.

Definitely yeah, for sure.

So was it up to you guys to choose John Feldmann to jump into the studio with?

Partly – our management got in touch with him too I believe. It just seemed pretty natural. We’re even playing a song that we recorded with him on this tour as well as over this summer, and it went down a real treat. He’s really just the type of dude for our style.

So when you’re playing shows back home, do you have any favourite cities to play? Any where that stands out for you?

Obviously London because that’s kind of the home shows for us, where loads of friends and family come down to watch and of course it’s the capital so that’s obviously a big factor, Glasgow always goes down a treat too, we have a really strong following up there and we always have a good time at the shows.

Manchester would be the other top one as well. We have a few family members up there too.

I think it was around two years ago, I went up to Manchester to watch you guys at the Apollo and it went off!

Yeah there’s always a really god atmosphere in Manchester. So those three are the top three for us, but wherever there’s a crowd, then we’ll be there!

So do you find any differences in playing in America in comparison to playing British shows?

There’s definitely a difference because we don’t play out here (USA) as much, but this is our fourth tour here and the shows are so big now and people really tend to connect with it. Every time we play out here, everyone walks away with big smiles on their faces, similarly to the UK. So we’re turning a lot of heads, even when we’re a support act.

We actually find it a bit grungier out here. Quite punk-rocky and I think that’s the nostalgia of American style, seeing as they had Nirvana and so many other greats over here.

Catch The Hunna on their US tour supporting Barns Courtney until October 5th. Tickets can be found here.