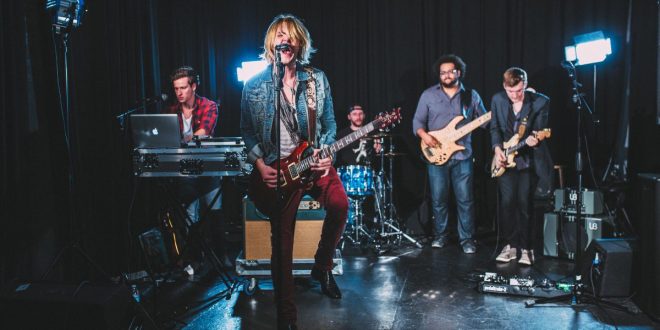 Interview: Mikei Gray of The Frst

The Frst (pronounced ‘first’) is a collaborative project led by singer/guitarist Mikei Gray, and supplemented by an all-star cast of touring musicians who have built acclaim within the past decade. Formed in Nashville, Tennessee in 2017, Gray and company showcase an identity that combines throwback alternative influences with modern, punchy production. Their most recent offering, “Rules,” is earning steady recognition, following that of “Seven Eleven,” their previous single, which debuted at #2 on Soundcloud’s New and Hot USA Rock chart earlier this month.

I caught up with Mikei to discuss his decade of band experience, formative days as a musician, as well as The Frst’s inception and burgeoning success.

ME: You’ve developed your credibility as a guitarist for 10 years now. What kinds of lessons have you learned from those experiences?

Mikei: I feel like there’s a lot more to them than just music. We’ve learned to look after ourselves and take better care of each other. To be able to rebuild after difficult times is huge. There’s definitely a lot of positive, fond memories, but it’s working through those trials and tribulations together that helps us grow much more.

ME: In terms of musical growth, which influences really shaped your identity as a kid?

Mikei: Early, early on, Led Zeppelin and AC/DC hit me hard. Once I was a teenager, it was, of course, Nirvana, Soundgarden, Queens of the Stone Age – bands like that. It’s been a combination of that, and everything else that has come around in the last 20, 30, 50 years, really (laughs)!

ME: Fast forward to 2017, and you have a new band, The Frst. How did you guys get together?

Mikei: It started in Nashville from my time working with so many amazing musicians. I’ve gotten to work with mostly everyone in The Frst before we all came together. I wanted to start an awesome band, and they were gracious and willing enough to do it. We’ve just been trying to keep it light and fun, and make sure each song is different from the last, so we don’t find ourselves falling into that common rut.

ME: I can tell there’s an element of fun, because you have the tagline of “No ‘I’ in Frst,” and you release your music on ‘Missing I’ Records.

Mikei: Right, right! I love your attention to detail there; nobody had thought much of that! That’s definitely an indicator of our sense of humor. Even back when we did our first tour, we’d always been real pranksters and would joke around all the time.

ME: Somehow, it reminds me of what Sub Pop used to do with their ads back in the day, where a description of a band’s release would be lighthearted and satirical.

Mikei: Yeah, that’s a great reference! I kind of miss that, you know? I feel like a lot of artists nowadays tend to focus a lot on trying to be super cool, with these big, visual videos. There’s nothing wrong with that, but other than taking the music seriously, their approach to them shouldn’t be too serious. It’s hard to focus so much on pretending in videos, but I think with ours, they’re pretty straightforward.

ME: Let’s talk about those early singles, starting with “Another One.” How did it feel while you were planning to release it?

Mikei: I think with “Another One,” it was tricky because before we released it, we had no idea how it was going to be received. The original goal was to set aside any commercial aspirations. We wanted to put it out it as a kind of anthem against distracted driving because, living in Nashville, I can’t tell you how many times we’d either been hit, or almost hit, by people who were on their phones. Now there’s that ‘hands-free’ law, but at the time there wasn’t, so that was our social reason for releasing the song. Personally, it was big, because it was the first release that I’d played all the instruments on, so I was very nervous about that. But James Wisner did a great job with the mix, and Andy Van Dette with the master. We were really blessed with the turnout, and the video for it is our highest-viewed on YouTube.

ME: In terms of the mixing and mastering process, what was it like working with James and Andy?

Mikei: I’ve also worked with both of them for just about 10 years, and they’ve worked with a bunch of great bands. James, in particular, has a very clean sound. As an engineer myself, I’m usually a fan of having lots of distortion and harmonics, and I’m definitely not afraid to go all in and get the sound that I want. James just knows what to do with all of it. Then when he sends it over to Andy, Andy’s always really excited and also knows how to present everything, and it turns out great.

ME: It’s got the modern punch, but without sacrificing the crunch, which I love.

Mikei: I appreciate that! I feel like a lot of modern rock has lost a lot of its edge. It’s usually a bit too slick. Socially, politically, and culturally, it’s part of a fractured era that we’re in, and it needs to be more impressive in order to convey that.

ME: Yeah, I look at everywhere else, like Japan, Philippines, United Kingdom, where rock is still fresh and thriving, and I ask myself, “Where did we go wrong?”

Mikei: Yeah! It’s funny you mention the UK, because London is actually our top listener demographic on Spotify. They’re a bit more receptive, I suppose.

ME: When you released “Seven Eleven.” would you consider that song to have been your turning point?

Mikei: It was, and that’s something we’ve only really been made aware of recently. I mainly wrote it just to have an original song ready for one of our hubcap guitar demonstrations online. When coming up with the lyrics for the song, it clicked one day, once I made note of the alternative culture that goes on at 7-Eleven. Growing up in Florida, there were tons of 7-Elevens, as there were in New York and California, but there doesn’t seem to be any in Nashville, or anywhere in Tennessee. So, I thought it’d work for the hubcap demo, with sort of the ironic double play.

Once the song came out, it took off right away! Loudwire added it to their Weekly Wire, and from there, it got onto more and more playlists. Then the video came out, and that one got quite a good response as well.

ME: Now, let’s talk about your latest track, “Rules.”

Mikei: “Rules” is actually the first song to feature all of our guest musicians, and it was also the very first song I wrote for the project. After that, I started working on what people came to know as the early singles. It was an honor, man! We had Andrew Leahey [The Homestead], Nathan Cogan [Taking Back Sunday], Justin Smith [Eliot Root, Maggie Rose, Them Vibes], Eric Barfield [Kris Allen, Evan’s Blue, et al.], and Jeff Hutchins [Insane Clown Posse].

Unfortunately, I had to track each of them separately, since I couldn’t fit all of them in the studio to track it live. I put together some scratch tracks, brought in Jeff, who laid down the drums, then Justin, who did the bass, et cetera, et cetera. But it ended up working beautifully. After we finished up production, we did the video, and it turned out great! I’ll just say it’s going to give “Another One” a run for its money.

ME: That transition is interesting. The first song you write for the project ends up being your most involved, once it’s fully realized.

Mikei: Yeah! It’s also one that leans more toward the indie side of things, rather than hard rock.

ME: Whereas the other songs are angrier, heavy-edged, this one accentuates the fun.

Mikei: It does. That goes back to us not taking our approach too seriously, and the video serves as a preview for what’s to come. Within the next year and a half, there will definitely be more songs that combine indie pop with a kind of harder edge.

ME: Overall, what have you learned in starting The Frst, and seeing things fall into place?

Mikei: Just to keep your head up, and keep working. With this project, I think that not having any commercial expectations, and simply doing this for the fun and passion, making noise with all of our friends, has led to what we’ve been blessed with so far. As long as we keep things pure, we’ll be okay.

ME: Will we hear these themes expressed on a future album, or are you sticking with singles for now?

Mikei: We’ll continue to release one single at a time, and then the first album will be called Prelude. We’re expecting that to come out about next summer, tentatively. There will be one more single in the fall, and then next year, we’ll be dropping singles like crazy (laughs)!

I come from a family who is passionate about all things music. I learned to sing at an early age, and by 13, had my very own Fender Strat guitar. I tried my hardest at learning all that I could. Because I was born with cerebral palsy, I had to teach myself an adaptive playing style. I learned to write and record my own music, despite these difficulties. In college, I started making great use of my writing abilities by reviewing music, as well as copy editing. I guess it's best to stick with what you know, while welcoming a fair challenge at the same time.
Previous New Politics, The Mowgli’s and Plain White T’s join forces for 3 Dimensional Tour
Next Gallery: Vampire Weekend at the Toyota Music Factory in Irving, TX (08.18.19)