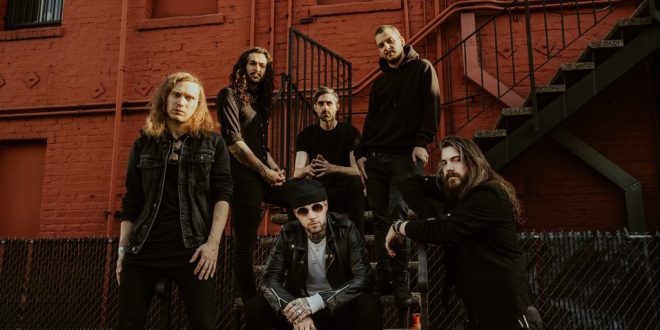 One of most interesting things about our “introducing” interview series is getting to talk to both artists who are just beginning their career, and ones who are well into it, but on the edge of taking that next step. Betryaing the Martyrs are one of the latter. Formed in 2008, and releasing their debut album in 2011 the French metal band have shared the stage with the likes of Motorhead, Slipknot and Slayer and played the main stage at Hell Fest in 2017.

They’re gearing up for the release of their fourth studio album, Rapture, on September 13th and just dropped their latest single “Parasite.”

We recently sent the band some questions which they were kind enough to answer, read through our chat now.

Baptiste Vigier : Our music is aggressive yet catchy and melodic at the same time. You have the fast/energetic drum beats of rock and metal along with the screaming of our front man, but beautifully enhanced by a unique orchestral vibe brought by our keyboardist who’s also singing (not screaming) on top of it. It’s a pretty unique mix that a lot of people can enjoy! Even if you’re not a metal head. But I feel like the best way to discover BTM is through our live shows. It’s a whole visual and sonic experience that provides a lot of fun and energy!

Baptiste Vigier: I first listened to metal when I was about 14 years old. A girl I was in love with was listening to Korn and Slipknot and when she introduced me to that whole new world it changed my life forever! So I could say that love introduced me to metal and music in general since I quickly picked up a guitar after that and all I wanted to do was tour the world and play music with my best friends since then!

Baptiste Vigier: Right at this second I have two shows in mind. As a French musician, our first appearance at Hellfest on the main stage was simply incredible and allowed us to reach our career’s next steps since all the European industry is present at this festival. I feel like we did a pretty good job that day!

The other one is definitely our appearance at Rockstar Mayhem Festival back in 2012. Being allowed to share the stage with legends such as Motorhead, Slipknot, Slayer and more in front of 35.000 people is definitely a massive step in a metal musician’s life!

Baptiste Vigier: Dedication. Hard work. Live performances. Imagery. Online presence. Playing hundreds of shows… pretty much everything! Being in a band nowadays is far more complicated and vast than just playing your instrument and you need multiple skills and incredible motivation to succeed. You have to be the best in all areas. A little bit of luck is always needed of course, but I truly believe that the more you work, the less important that luck factor becomes.

We’ve always prioritized our live performances since day one. In the metal genre, I believe that this is truly where our art is at its peak. This is where you can convey all that energy, all that heaviness, all that anger that resides in our genre, and release it on stage. Whether for me, as a musician, or as a member of the audience. It’s all connected. The power we feel, the vibe transmitted by the audience, we always feed off that and try to give it back. That’s why we acquired that reputation as early on as our first shows back in 2009, of always providing and giving a lot on stage. Moving a lot, playing with the audience, jumping up and down, banging our heads all the time… even playing on the actually bars of the venue or participating in the circle pits while playing! We always give 110%, whether we’re performing in front of two or 60,000 people.

Baptiste Vigier: Yes we do! As an artist, as a musician, as a “group” of people forming a “band”, we’ve always loved that creative part as much as the intensive touring one. We all write and we all participate in the creation on our music one way or another. Whether a song starts from a cool guitar riff, a nice piano melody, a groovy bass line or a catchy vocal line, we will all give our opinion and work on this together in order to come up with something we’re all genuinely happy about.

I personally don’t really understand musicians performing songs they didn’t write. It’s part of the process. Part of who you are and what you’re trying to convey! Except maybe if you’re a session musician, the audience is expecting the band to come up with its own material, years after years and follow and love this evolution. As people, as masters of your instruments, as music and lyric writers too.

Baptiste Vigier: We have tons of things going on in 2019 so far, and even if we just lived through the toughest time of our career (not more than two weeks ago our entire trailer caught on fire destroying all our gear and personal belongings) we have many, many things planned! We just did our first ever North American tour as headliners, we played for the very first time in Asia before that and now we’re about to embark on our third European headliner tour followed by multiple French concerts! I couldn’t be more excited about our new album “Rapture” and what it’s going to bring for us and for the fans all over the world!

2019 also marks the 10 year anniversary of our very first EP “The Hurt, The Divine, The Light” so it might be time to re-release something or do a couple tours themed around that… but I don’t want to spoil any surprises we may have 😉

Baptiste Vigier: Korn “Follow the Leader”. I remember I was completely freaked by the fact that the actual album starts at track 13! I remember having to bring it back to the store, asking for a refund because I thought it was broken or something! At that time I was always trading CD’s with my friends. Slipknot, Linkin Park and Korn definitely played a huge part in our metallic journey!

Baptiste Vigier: I think it was Linkin Park for their Meteora release tour, quickly followed by Korn, both at Bercy (Accord Hotel Arena in Paris) 10 mins away from my house! I remember going back home that night with bruises and scratch marks everywhere on my arms due to my first time in the pit. I was probably 14 years old back then and a lot of people wore spike bracelets and wristbands! It was a crazy experience and I’ll cherish that memory my whole life! One of my dreams is to actually perform at that very venue one day! Fingers crossed.

Baptiste Vigier: As a French metalhead it would be very hard for me not to mention Gojira, who are a truly great example to follow. Their dedication throughout the years, their incredible musicianship, as well as the cause they support make them one of my favorite bands. They opened many doors for many French artists including my band, and the least I can do is to mention them here. Pure respect for what they have achieved.