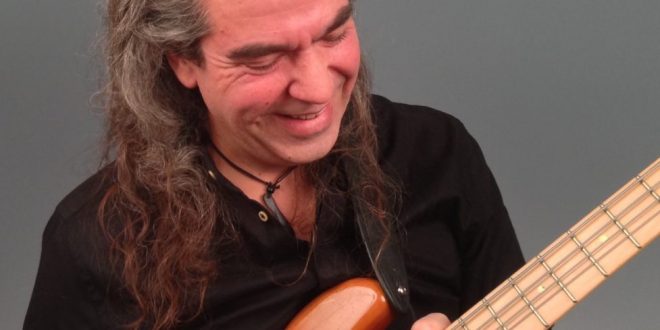 It’s been a year since we sat down with Award-winning Canadian musician Ed Roman.  Ed has been busier than ever, promoting his latest album and animated Film Festival Darling, “Red Omen.” The music video has taken Ed’s music around the globe several times over.  He recently returned from a month’s long tour of New York City, and we caught up with him to discuss all things Ed:

Music Existence: Hi Ed!  It’s been a year since we chatted, and we’d like to thank you for taking the time to catch up with us.  What’s been happening with you, this past year?

Ed Roman: It’s wonderful to talk to you folks at ME and thank you for the opportunity to chinwag and such..

My primary focus has been on the release of the Red Omen video/animation. I worked very closely with acclaimed animator Nelson Diaz and There Be Dragons Creative Media in New York City to create a 4 1/2 minute animated short of the title track of my most current album Red Omen. In conjunction with Whole Dyslexia the Red Omen Video has become part of a public and corporate fundraising campaign to help facilitate tutoring programs for children that struggle with dyslexia as I did when I was a child..

ME: You recently spent a month in New York City.  What was the highlight for you?

Ed Roman: The biggest part of my focus in New York City and I would say the highlight of my adventures over the course of May was the release of the video Red Omen. It was released on May 23rd at the school of visual arts in Chelsea Manhattan. Nelson Diaz and I spoke for over two hours and talked about the process of songwriting, the development of the song, processes of animating and everything that goes hand-in-hand with the Whole Dyslexia Society. In the immortal words of Ed Sullivan it was “the really big show”

ME: There’s always some great music going on in NYC. Did you have a chance to check out any other performances while you were in town?

Ed Roman: The tour was absolutely fantastic as a result of so many things. At first one of my oldest musician friends Tobias Tinker joined me for a week. We embarked on a gorilla like recording project in my apartment in Hells kitchen. It involved a basic premise which was anything goes. Not the Broadway musical although I was living off of Broadway but we recorded everything from fence jamming in Central Park to sirens that were passing by my apartment in the middle of the night as a part of the recording project. Out of that stint we had a fantastic grouping of ideas and songs hit the floor. After he left for Berlin I had an inordinate amount of TV and radio appearances as well as gigs all over Manhattan and Brooklyn and Long Island so most of my time was consumed until the evenings or late evenings. My biggest conundrum was I picked up two terrible colds and flu’s within two weeks. I was running a fever and trying to self maintenance myself the entire time.. Next time.. 😉

ME: Your latest music video has been playing around the world at various film festivals.  What does that mean to you, to have it shown to worldwide audiences, and not just “online”?

Ed Roman: When I embarked on this mission, I needed to find a way to create more attention around what I was doing other than just releasing the video as I’m needing to raise public and corporate money for facilitating tutoring for children that struggle with dyslexia. When my manager, Michael Stover, and I we’re trying to figure out a way to make this happen and the best solution we found was to try to get it into as many film festivals as we possibly could. This way it would receive far more global attention before any fundraising occurred. Michael has been working diligently behind the scenes to make that a reality and it was no small task. Thanks to his efforts and the continual momentum behind this mission we are still hearing from people on accolades and further participation‘s. What it really means to me is that the mission is succeeding and people are connecting with the video. My goal is to raise a lot of money. My bigger hope is that it can open up a dialogue with ministries of education about integrating the Davis dyslexic method into early education. I am absolutely elated..

ME: Are their any plans for a release date, where everyone could finally get to see this video?

Ed Roman: As I mentioned the release happened on May 23rd but as far as which platform the public will be able to view it on in the next little while is still undetermined.

ME: Rumor has it that you’re working on your next album?  Is that true, and can you give us any insight to the overall feel on the record?

Ed Roman: Someone call Marvin Gaye. The grapevine has been talking.

The title of the latest project that I’m working on is “A Recipe For Perpetual Spring” and your question about the overall feel of the record is wonderfully interesting to me. I’ve vacillated in and out of the idea of how the songs should sound and be approached. As time has progressed some of the material or a good portion of it has started to want to feel different to me but not for my sake….. but for the songs… i’m going to use a few words like raw, edgy, yes, why and thank you.. There’s more self admission on this record for me than any other.

ME: If you could collaborate with any musician, living or dead, who would that be and why?

Ed Roman: I’d like to get some simple recording equipment go to a really cool junkyard and spend about two weeks living in shack smoking things, getting drunk and yelling and screaming dark and terrible beautiful things into the night sky with Tom waits. That would be ambrosia..

ME: Any more live concert dates coming up for you in the near future?

Ed Roman: I was supposed to be playing in China in Beijing this past June but unfortunately as a result of these issues between extraditing people from Canada to the United States as a result of miss-doings that was kiboshed. At the moment my main focus is this fundraising campaign and completion of the songs for “A Recipe For Perpetual Spring” and some new releases in the late summer and fall.

ME: Thanks for catching up, Ed.  Any parting words for our readers and your fans?

Ed Roman: It’s always wonderful to talk to you good people at ME and I always relish the opportunity. I’d like to thank your readers for taking the time to read this interview and I’d also like to thank all of the Ed Heads around the world who have been supporting the music and sharing so much love and support with the Red Omen video. Mucho Love 📡🛸🗿