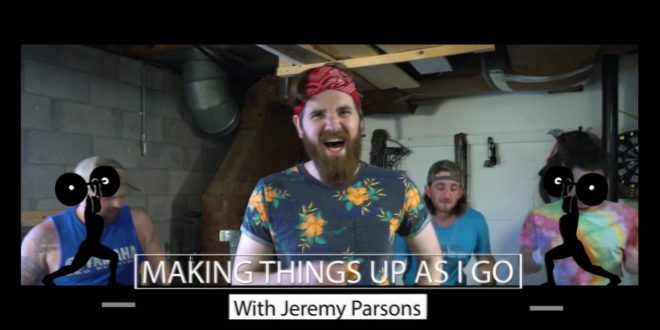 Nashville singer-songwriter Jeremy Parsons debuted his latest music video, “Making Things Up as I Go” on “The Josie Show.”

“I hope this video makes you laugh and smile as much as we all did when we were making it.”— Jeremy Parsons

In April 2018, Jeremy Parsons released his imaginative music video for “Why Is the Bluebird Blue.” The video was an Official Selection in several global film festivals, including the New York Lift Off Festival and the James Bond III Film Festival, among others. The video helped to propel the single into the Top 20 iTunes Country Songs chart (Canada), while racking up more than 7,000 youtube views.

Now, Jeremy Parsons has reunited with P.J. Schenkel of Three Hat Media, the team behind “Bluebird” for his most ambitious video release, and his first of 2019, “Making Things Up as I Go.” Parsons called into the worldwide syndicated radio show, “The Josie Show” on Thursday, July 11th, to premiere the video on the show’s site at https://www.josieshow.com/music-video-premiere.html. The song is taken from the album, “Things I Need to Say.”

“This song is very important to me as it was written and made in a very rough time in my life,” says Parsons. “Everything felt out of my control and unstable. It was nice to be able to write the bright side from a dark and realistic perspective. It was important to me that the video reflect that too. P.J. Schenkel, as always, was able to use his genius to perfectly bring that to life. You never know what’s going to happen in life or even where the day might go but you can always get through it on your feet and make it work. I hope this video makes you laugh and smile as much as we all did when we were making it.”

P.J. Schenkel added, “Sometimes in the grind you forget how lucky of a person you are; this project absolutely sent me a reminder. I always enjoy being creative, but I’ll always love being creative with Mr. Jeremy Parsons. We’ve been working together for almost 10 years now, and this was the perfect project to describe how we do [it]. We worked hard for this video, but it was hilarious and fun the entire way through. We hope it translates!!!”

Watch “Making Things Up as I Go” at https://youtu.be/mrlhIxrIuSo.

Jeremy Parsons is currently on The Passing Through Tour with Chad Bishop in Texas:

ABOUT THE JOSIE SHOW: Josie Passantino, known as “America’s Radio Sweetheart” started her career in radio at the age of 14. Now, at 23, she owns a full network of unique brands. Josie has interviewed over 2500 amazing talents in her 9 years on radio for both her show/station and other shows she has hosted. Josie is a voting CMA member and multi-award-winning radio host with multi-award-winning brands. http://www.josieshow.com

ABOUT JEREMY PARSONS: Born in San Antonio, Texas, Jeremy Parsons grew up soaking in the sounds of Texas music in the dancehalls of the Lone Star State. Over the past decade, Jeremy has played all over the U.S. and in Europe, including numerous venues in Texas. The first single from his latest album, “Things I Need To Say” was the Top 40 Roots Music Report and IndieWorld Report track, “Burn This House Down.” The song paints a poignant picture of heartbreak and acceptance that still remains relatable. That single was followed up by the equally well-received, “Why is the Bluebird Blue,” also s a Top 40 Roots Report americana single. “Bluebird” also reached #2 on the Hits You Love pop charts. The videos for both songs were nominated and selected for numerous Film Festivals, including the Jersey Shore Film Festival, Indie’s Best Films Festival, and the Monkey Bread Tree Film Festival, an IMDB-sanctioned film festival. Jeremy currently resides and performs in Music City, USA… Nashville, TN.

Jeremy Parsons “Making Things Up as I Go”