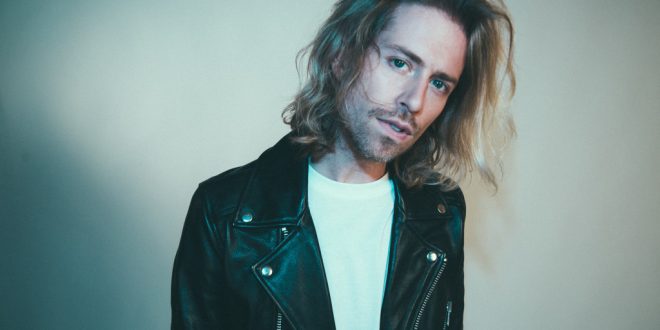 Earlier this week The Rocket Summer’s multi-instrumentalist, producer, songwriter, and performer, Bryce Avary, shared the second single, “Morning Light,” from his new album, Sweet Shivers, due out this summer, on August 2, 2019. Bryce Avary wrote an introduction to the newly released track for Talkhouse, and touched on the album’s larger context, saying:

“For as long as I’ve heard and made music, the notes and the songs themselves have always evoked colors in my mind. Particularly with songs I write, new or old, they all are the same colors when I hear them now as they were at their birth. Songs are deep and royal blues, dark and light greens, solid blacks, whites, reds, golds and pinks, and sometimes mixtures of several. Morning Light” to me is a trio of yellow, black and white which eerily reminds me of the bee on the cover of this record. I’ve been told my whole life this is called synesthesia, but to me, this is something I believe everyone has to an extent. We all live inside a lifelong mental and spiritual battle of sorts in choosing to believe that we are alright when the noise and “the voice” in its cunning way attempts to tell us otherwise. The noise of your future, the noise of your past, the noise of the right here and now. This song is about shedding light onto that darkness of the mind that is trying to shadow and drown the colors that give day-to-day life its beauty. A bit of a mantra: lean into the colors, silence the voice.

The colors are already there, but do you see them? I sometimes can… and I sometimes can’t. But this song is about choosing to at least stay in the fight to always keep my eyes open looking for them.

Last week, The Rocket Summer announced a 28-date North American tour. Fans will not only get to hear the new songs live for the first time, but can look forward to singing along to their favorite TRS classics. The up to 2-hour sets will have the quintessential high octane energy that Avary brings to every performance, balanced with intimate, cerebral moments, a delicate craft that Avary has curated and evolved since the dawn of his career.

The new album, Sweet Shivers, was announced alongside a pre-order campaign, including exclusive limited items ranging from handwritten lyrics to vinyl test pressings, and instruments used on the recording, many of which sold out within hours of launch. Avary’s highly-anticipated, seventh studio album, Sweet Shivers was crafted between a rural Texan cabin and Los Angeles, bringing a broad perspective that permeates the album. Like the bumblebee that graces the album’s cover who sees color differently than humans, the collection of songs invites listeners to try on a new perceptive lens. The album is Avary’s first since 2016’s critically-acclaimed Zoetic which was praised by New Noise Magazine as “undoubtedly The Rocket Summer’s best release,” and marks another defiant step forward in his sonic evolution following sold out dates on his most recent headlining tour.

For a first taste of Sweet Shivers, The Rocker Summer also recently shared the anthemic, debut single, “Shatter Us.” The brand new video explores the emotion that builds in the song through dancer / actress Brianna Brill, and fans get a cameo of Bryce Avary. The song debuted exclusively on Alternative Press. Avary says, “when I close my eyes and hear this song… I envision it being nighttime and buildings all around me seemingly crumbling yet refusing to allow the wreckage and debris take down what’s most important in my life. I don’t hear it as a ‘woe is me’ type of lyric, but rather more of a battle cry to refuse to slip when the rain is pummeling. Sonically, I wanted to paint a picture that was explosive and calm, soft and violent.” The song sets the stage for the forthcoming album and the project’s “veritable army of die-hard fans (Diffuser FM)” can secure their tickets to see it performed live, starting June 5.

Previous Chase Atlantic travel to outer space in music video for “Love Is (Not) Easy”
Next Album Review: Oliver Ray – Out Passed Nowhere