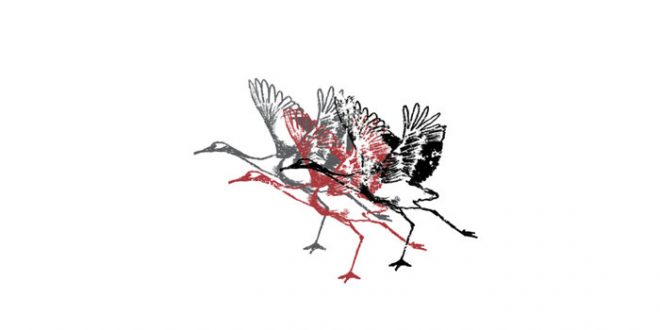 The Gray is a rising Californian collective comprising vocalist Cameron Connor, guitarists Chris Boonyawan and W. Shane Saret, bassist Mark Mariano, and drummer Mike Koshiro. Formed in 2018, the Los Angeles metal quintet utilizes a trifecta of technical riffs, post-hardcore-inspired screams, and wailing feedback to bolster the resonant inevitability of death. Following the release of two singles – “Issei” back in October and “Berry Me” this February, the band has expanded these elements into EP form via The Gray (Crane), which dropped last Saturday.

As the EP opens on “NY Sarwar,” its initial layered feedback serves as a lead into the instrumentation. Both the riffs and vocals emit similar intensity, while the percussion shifts between various stances. With the song’s progression, images of rampant violence amidst a bleak, indifferent backdrop come to mind. The breakdown is especially noteworthy, Saret’s punk-tinged, enharmonic screaming providing a subtle contrast to the extensive involvement. “Pico” continues these aspects with similar force, except in a more direct and bullet-like manner. I found the dissonant guitar accentuations – both high and low registers – to work particularly well once the percussion slows down. From a thematic standpoint, the song stays on the perspective of the environment during one’s demise, this time of a seemingly desperate, agonizing suicide attempt.

On the EP’s flipside is “The Library,” the penultimate and latter of its shorter tracks, which emits imagery of reuniting with a recently departed love interest. There’s an interesting addition early in the song, with its lead melody resembling a type of spinning, ghostly dance. Further on, Connor and Saret exchange solid vocal interplay during its transitions. By the final track’s title, “It Gets Worse…”, there’s an angle that suggests an unwanted avoidance of clinical death and the subsequent dread of life. All of the song’s elements come together by way of a straight-ahead thrash approach, before compacting in a densely layered and gradually feedback-driven close.

Overall, The Gray (Crane) makes a solid showcase of the band’s present stylistic and thematic elements. Though each song maintains an extreme spectrum of down-tuned tones and an equally brooding concept, the band integrates a distinctive, nuanced feedback mechanic that does its job in benefitting the EP’s pacing. I’m looking forward to how their musical identity will eventually translate in a full-length setting.

I come from a family who is passionate about all things music. I learned to sing at an early age, and by 13, had my very own Fender Strat guitar. I tried my hardest at learning all that I could. Because I was born with cerebral palsy, I had to teach myself an adaptive playing style. I learned to write and record my own music, despite these difficulties. In college, I started making great use of my writing abilities by reviewing music, as well as copy editing. I guess it's best to stick with what you know, while welcoming a fair challenge at the same time.
Previous Gallery: Elle King at Upstate Concert Hall 4.24.19
Next Concert Preview: GRiZ at Palace Theatre – 5/8/19