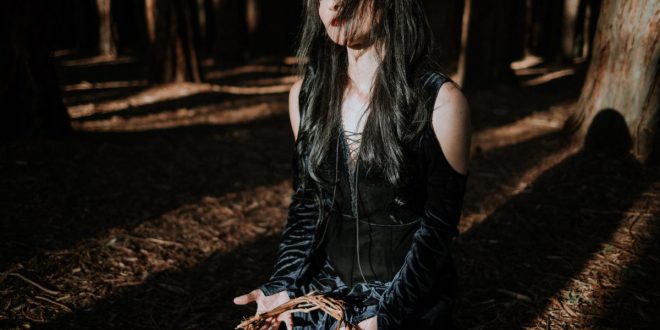 I would describe the sound as dark acoustic with female vocals, and with heavy guitar flourishes and atmospheres.

How did the band first come together?

The project started with my writing and creating of demos. I then recruited session musicians for recording and performances. It has been my solitary vision all along, and I have collected collaborators to work with.

Breakout shows would be firstly, opening for Zeal and Ardor, to a sold out crowd of 500 people. I was terrified to begin with, as this was the biggest crowd I’d played to thus far. Suldusk then opened for Anaal Nathrakh two weeks later, and we just embraced the stage experience. It was a riveting show where the balances where omnipresent and as such, it was very enjoyable all around.

What does it take for a band to stand out in a music environment such as Melbourne?

To me, a band that is authentically different always stands out. I believe there has been a lot of goodwill for Suldusk because we are also versatile in sound – although we intrinsically belong in the dark rivers of metal. We have played with black metal, thrash metal, melodic metal, doom metal and post metal bands!

Ok, well at our best, our live performances are very atmospheric and perhaps transportive. Emotion filled, exciting and enjoyable on some level Id like to think!

Suldusk is definitely my vision, although going forward I am starting to write with other composers. I am a lone wolf by nature but the musicality of what I want to delve into is better served by collaborating with musicians of a certain caliber. I am currently surrounded by many such fine musicians and it is blissful to realize an idea with someone who understands that vision.

2019 is about releasing Lunar Falls and letting people know this sound exists. The response has been extremely heartening. Also, the later part of the year will be about bringing the full band experience of Lunar Falls to life and playing shows here and OS to that effect.

I was obsessed with 60s music as a child, so probably some Doors or Janis Joplin from the bargain basement.

My first real concert was Pantera. I think I lost most of my hearing at that one.

My most influential band would be Agalloch. They blended all the elements of music that I love – rich acoustics, atmospheres, heavy sections, melancholy sections while always being so deeply very immersive.