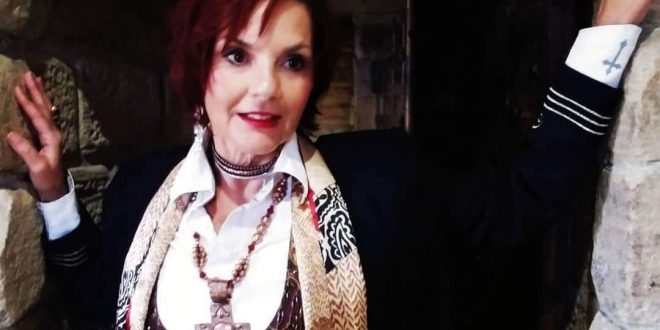 The award-winning artist and children’s book author was selected from more than 500 entries.

With the August 2018 release of her album, “Stubborn In My Blood,” Tia McGraff cemented herself as one of folk music’s most exciting and accomplished women. She reached the Top 25 on the iTunes charts with her cover of the seminal classic, “One Tin Soldier,” while the album’s title track climbed onto radio airplay charts around the globe. Her latest single and music video release, “Let ’em See Your Strong” has become both an anthem of empowerment for women everywhere, and an inspirational message of hope and faith during the Easter season, and year-round. The song earned her a 2019 Posi Award nomination. The video made its premiere on Christian music’s leading site, JesusFreakHideout.com. Along with her musical partner and husband, Tommy Parham, Tia has performed on an international level, selling out shows both in North America and abroad.

Now, Tia McGraff has been selected, from more than 500 entries, as a 2019 New Folk Finalist. As a result, Tia and Tommy will be travelling to Kerrville, Texas to perform and compete at the 48th Annual Kerrville Folk Festival. The duo will perform on Saturday, May 25th at the Threadgill Theater. Established at the suggestion of Peter Yarrow in 1972, these annual concerts are one of the high points of the Festival and for songwriters from across the world.

ABOUT THE KERRVILLE FOLK FESTIVAL: The Kerrville Folk Festival Foundation produces many amazing programs, with its Flagship event as the Kerrville Folk Festival. It is 18 days and nights featuring national and international performing songwriters in intimate musical performances. Weekend evening concerts are at Kennedy Outdoor Theater and weeknight shows are at the Threadgill Theater in the Campground. The Festival is held at Quiet Valley Ranch, nine miles south of Kerrville, Texas. This year’s dates are May 23 – June 9th, 2019. Now in its 48th year, it is the longest continuously running music festival in the United States. It is celebrated by a community which considers itself a family. Everyone arriving, whether for the first or fortieth time is greeted with, “Welcome Home!” Over the course of the 18 days and nights, activities are provided for all ages with a focus on nurturing and developing artistic expression, especially the art of songwriting, in a loving family-friendly environment. For more information, please visit https://www.kerrvillefolkfestival.org.

ABOUT TIA MCGRAFF: Hailing from just south of Toronto, Ontario Canada, Tia McGraff has performed at sold out shows around the world (including the coveted, Bluebird Café, in Nashville, TN.) She has received international acclaim for her music, including radio play on such notable shows as Bob Harris Country on BBC Radio 2 in the UK. A gifted author, Tia’s children’s book, Jake The Road Dawg has helped raise funds and awareness for her local chapter of The Dolly Parton Imagination Library. Seven international CD releases, various film/tv placements, radio and TV appearances, and numerous nominations and awards (including Americana CD of the year first round nomination for 2016 and 2019 Grammy Awards), have earned Tia and Tommy a respect in the music industry and a global fan base. For more information, please visit http://www.tiamcgraff.com.