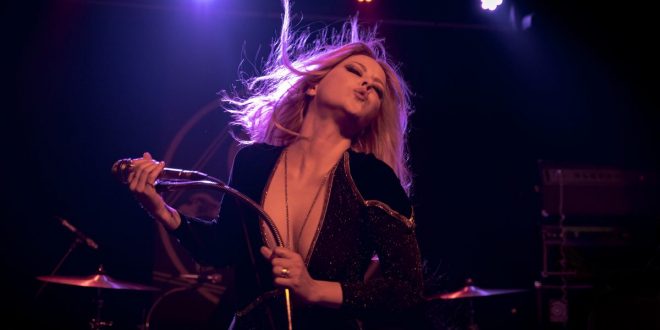 Known for their retro 70’s doom riffs, haunting melodies and the dark magical voice of Johanna Sadonis defining the bands sound from their deep influence from bands such as Black Sabbath, Fleetwood Mac, Deep Purple, Blue Ösyster Colt and Heart.

On Wednesday, March 27th Stockholm’s Lucifer finally made their way to the Big Apple for the first time to headline Brooklyn’s very own Saint Vitus Bar with direct support from Canadian rockers Spell, on that same very night one of the biggest names in rock n roll Kiss would be playing their final show ever at the most iconic arena in the world Madison Square Garden, it would prove to not make any difference for Lucifer, as I stepped into the venue at the beginning of the show it was already packed wall to wall with fans eagerly awaiting to witness live for the first time the mystical occult sounds that are Lucifer.

As Lucifer took the stage to a dark intro they then hit off their set with “Faux Pharaoh”, while in between vocals whipping around her platinum blonde hair dressed in a black body suit with tassels draping from the sleeves Johanna’s mystical stage presence much reminiscent of Stevie Nicks had the audience immediately mesmerized. I the big highlight of the set seemed to be their cover of the Rolling Stones “Dancing with Mr. D” actually sounding like Black Sabbath was doing the cover with Stevie Nicks on vocals, other highlights included the heavy fan favorite “Phoenix”, a new and yet to be recorded song entitled “Ghost” and the ever popular cinematic single “California Son”. With all this being said about the highlights of the set, honesty it was actually hard to really make out what really was a true highlight with the audience, it really seemed every song on the set had the same huge reaction from the audience.

Now that the band have already a new album in the making we can only hope that it doesn’t take long for Lucifer to make it back out to North America.

NewYork Based Photographer. Music Enthusiast with a background in Graphic Design. Whether I'm shooting a live event or just out wondering the streets its about capturing the moment.
Previous Trevor Drury Releases New Single
Next Silversun Pickups announce new album, debut “It Doesn’t Matter Why”