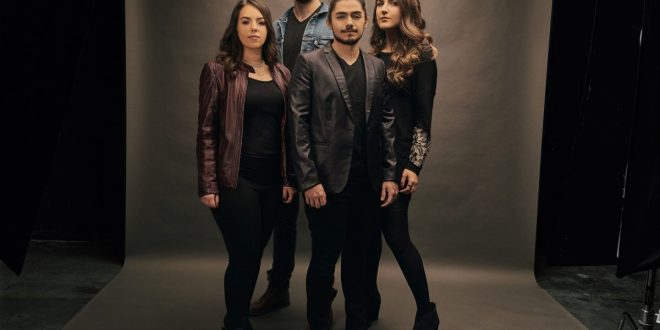 LA-based quartet Black Lyon formed less than a year ago, but they’ve already managed to craft a full-fledged dark pop sound that infuses trap beats, climatic strings, and enchanting vocal hooks. The band has shared their debut single “Down Down.”

“The song is a window into what it’s like to be in a relationship that’s about to go ‘down’ because both parties are so blinded by their own side they don’t care about fixing their relationship,” says vocalist/guitarist Alex Mor. “It’s a battle of egos. We’re really proud of how the song really captures the drama of the situation“

Black Lyon is not only a blend of sound, but a blend of cultures. Mor is from Venezuela, Barbara Schucko (vocals/bass) is from Brazil, Ece Muniroglu (keyboard) is from Turkey, and Bas Janssen (drummer) is from the Netherlands.

The group decided to put together a band that spoke about their shared struggles. Their music delves mainly into the dark side of human emotions, exploring subjects such as depression, anxiety, fears, insecurities, and failures. Yet, it does so in an accepting and somehow optimistic way.

Inspired by the contemporary style of artists such as Lana Del Rey, Sia, and Clean Bandit, and the romantic sound of composers such as John Williams, Black Lyon has developed a musical aesthetic that submerges the listeners into a dramatic journey.

Listen to “Down Down” on Spotify.

Tags Black Lyon Down Down