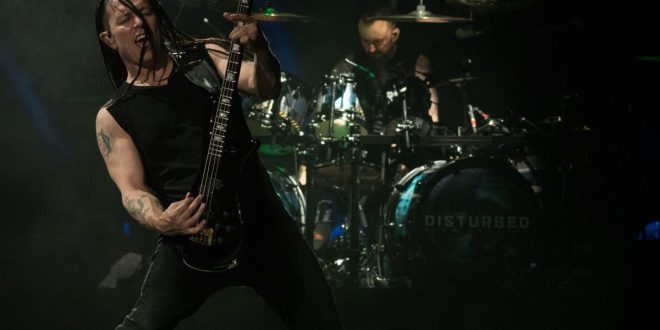 Gallery and Review: Disturbed at Alamodome in San Antonio, TX 1/25/19

Rock legends Disturbed struck deep in the heart of Texas for the San Antonio stop of their Evolution Tour. The band brought out Canadian rock group Three Days Grace in support, who’s performance included their greatest hits over the past 22 years.

Over the years, there’s one thing Disturbed is known for, and that’s making a statement. Whether it be political or philosophical, the band appears unaffected by the critics and have always done whatever the hell they want – which is what has always set them apart and made them so great.

While most bands now-a-days are doing a reunion/anniversary segment, Disturbed incorporates reflection and nostalgia in a fashionable manner that syncs with the rest of the set. A video montage displays the journey, the pride, and the evolution of where they are today before the chaos begins.

“Are You Ready” invites the 17-song playlist with assertion and opens the vault to fan favorites “Prayer,” “The Vengeful One,” and “The Animal.” Surprised by the beating heart of rock in the state of Texas, frontman David Draiman stated, “Every time we come back, you guys just keep getting stronger.” While on the topic of unison, Draiman asks the crowd to forget the constant stream of bullshit the world is feeding on, just for tonight. “It doesn’t matter what side of the fence you lie on, we all came here for the same purpose.”

Whether that reason is for the meanings found within songs, the musical tracks, or the memories attached to the soundtracks, fans cheered on Disturbed as they collectively hit all three together. A soft and somber intro to the politically driven cover of “Land of Confusion” took the audience by surprise before being amped up by Dan Donegan and his slate gray guitar with an original etched smiley. Older angst songs “Indestructible” and “Inside the Fire” has crowd surfers floating on the sea of hands and fists in the air underneath the orange light and you guessed it – fire.

A heartwarming performance of “Hold On To Memories” had fans choked up and in tears as a photo montage displayed images over the coarse of Disturbed’s career of personal and musical loved ones. The crowd went wild for Texas homeboys Vinnie Paul and Dimebag Darrell, along with others we have lost including Chester Bennington and Chris Cornell. “I encourage you to live everyone of you to live every single day to the fullest,” said Draiman.

The love and support each member has for the group truly shows – as each musician took a moment to shine. Bassist John Moyer set a good groove underneath the deep red lights while fans clapped along, and drummer Mike Wengren slayed the drums despite his recent sickness with the flu.

The night continued on with a slower section of the set at a secondary B stage as the band did an experiment to show the crowd depression and addiction are not just faces within the music industry. But bringing light to what’s normally swept under the rug is something Disturbed always has done and will continue to do.

Their evolved sound paves the way of artists to come in hopes to raise the bar in history. The diversity of the band, not just in tonight’s set but their discography set them apart. The band speaks true to the heart. And I guess that’s what makes us all Disturbed.