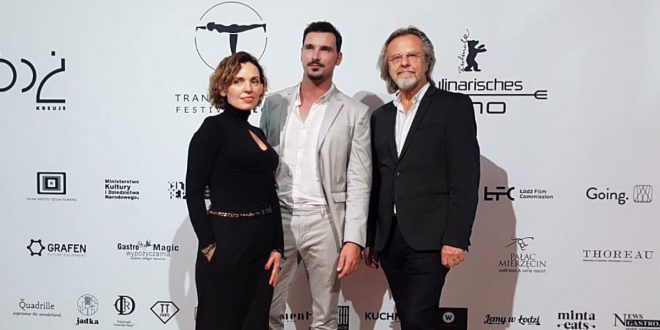 The world of music has seen many great stars grace the world stage and fade away. What stood for them, and have made them true icons of music are their contributions to the art… the music never dies!

One of today’s modern artist paving a path to greatness for himself is Paul Pedana. An independent artist, but Paul’s work has captivated audiences around the world. The young multi-talented artist has sold out venues in the United States, London, Eastern Europe, and most recently the Transatlantky18 festival in Lódz, Poland.

The short film for his new release “Come in” was premiered at the event to a sold-out audience. This artistic masterpiece was written and directed by Paul Pedana, starring the multi-award winner Ken Stott. Paul Pedana’s short film premiere was one of the highlights at the event this year with the show gathering several acclaims and positive reviews from the crowd.
The experience at the festival was more than surreal. The show of love and support were unprecedented, but it goes to show the depth of appreciation of Paul’s work. The artist is deeply sentimental, and he offers a new approach to making and delivering music.

Paul’s work contains strong social messages and a philosophical aspect that is unique to him. The Italian native brings a new flavor and fusion to the age-long art of making music with his deep style of music composition and a delivery that sets him apart from the crowd.

For 2019, Paul is prepping to storm the world music scene with the release of his second album, and three short films for his hit singles; Suave, My lonely Lonely Place, and Umbria; a single dedicated to his homeland Italy and his Italian heritage.

For Paul, music is more than the lyrics, it is an embodied art form, and it is this light that he goes to great length to express his art. Paul is much more than a music artist; he is a complete artist.

Expect more from this quintessential multi-talented human being in 2019 as he paves his path to greatness.

Currently, Paul and visionary artist Luyak are exhibiting their art forms titled ex-humans in art galleries across the world. The event features works by both artist, and this event further deepens the appreciation of Paul’s work. The first show was held at the magical Italian town Montone, and both artists played host to director Terry Gilliam, president of the Umbria Film festival.

In the words of Grammy award winner and pop icon Michael Jackson, “Everyday create your history, every path you take you’re leaving your legacy.” Paul is on a journey to greatness, but on this quest, he is not losing his soul, he is not losing his music. He is creating new paths, finding new forms of expression and making the most of this moment.

Stephen Vicino is the founder of MusicExistence.com. He created this site to give talented musicians a voice and a way to be discovered.
@@svicino
Previous Diskopunk unleash ‘Soaked’ single
Next Album Review: Wildways – Day X