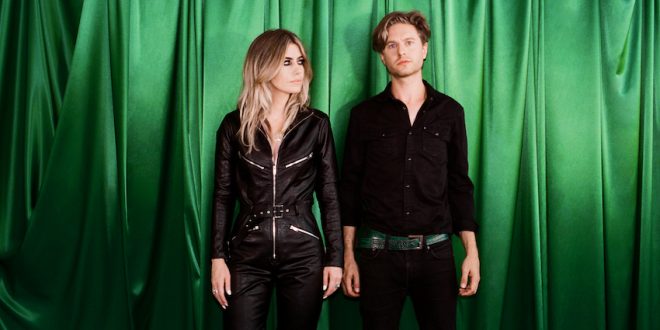 Brighton duo Blood Red Shoes make their long-awaited full return with their brand new album ‘Get Tragic’, which is set for release on January 25 2019 coincided with a set of launch shows in the UK and Europe in early 2019, including London Borderline on Sat 26th January. The band’s new single ‘Mexican Dress‘ is also released today.

The story of ‘Get Tragic’ can be traced way back to the relentless gigging off the back of their 2014 self-produced and self-titled record, when the heels finally fell off of Blood Red Shoes at the end of that same year. A near-decade of incessant road time and a non-stop pace of life finally took its toll, with the band stopping only to quickly hammer out “another ten songs” to release as their next record, before ploughing straight back into touring. The pair exhausted themselves to the point of collapse. “We didn’t, at any point, have a breather,” says Steven Ansel (drums and vocals), “We probably didn’t see each other for about 10 days a year, tops, for six or seven years.” Understandably, such incessant close proximity led to implosion. “We got the to the end of the fourth record and were like, ‘F**k you, I never want to see you again’,” Steven adds, half-laughing, half-sighing.

Vocalist and guitarist Laura Mary-Carter packed her bags and bought a one-way flight to Los Angeles, a complete radio-silence between the two bandmates stretching on for months. She fell in with a songwriter’s crowd, penning tracks and collaborations with big-time pop producers and pitching songs for the likes of Rihanna. It provided her with “a lot of time to reassess,” she says. Steven, conversely, “went out and took drugs and went clubbing for about half a year,” he laughs. “I don’t remember a lot about it. Classic break-up move, right?”

“That’s the whole running theme of this record,” says Steven. “The reason we called it Get Tragic is because we realised that everything we’ve been doing over the last three years is kinda tragic!” he says, prompting laughter from the pair. “Just like, ‘Ooh, I hate you, I’m going to America to find myself’, and like ‘Ooh, I’m gonna party for the rest of the year!’ Everything about it is such a cliché – we were like, ‘We’ve turned into a f**kin tragedy!’”

‘Get Tragic’, then, fully embraces the absurdity of Blood Red Shoes situation. As a result, the pair come out the other side sounding fresher and more assured than ever. Recording in the States, working with a new producer, ditching the two-piece rock rulebook they arguably helped write – everything that went into Get Tragic was a leap into the unknown. Their first move, post-reconciliation was a writing retreat in rural Wales, which saw them woken up by the village community leaders, who entered the house while they were sleeping and banished them from town, fearful of the rock group’s proximity to the local church.

Regrouping once more and booking in some more sessions in Leeds, Steven took a phone call a few days before round two. Laura had broken her arm. “I fell off a motorbike,” she explains. “I didn’t tell anyone – I didn’t post anything about it, but the fact is I had a broken arm for a long time.” Throughout it all, they went through a conveyor belt of managers and manager firings, the group falling out with everyone around them as they attempted to rebuild their core, two-way relationship. One of those managers “led us into a record deal that was really fucked, and we shouldn’t have signed,” explains Steven. The subsequent fallout and legal trouble financially crippled them both. As that period came to a close, Laura went through a romantic break-up that still visibly affects her. “We were finally getting there,” says Laura, “and I was like, ‘No… don’t let this happen too…’.”

Remarkably, though, Laura’s broken arm proved to be a blessing in plaster-clad disguise. Leaving her unable to play guitar, it prompted the longtime-guitarist to pick up a keyboard, and sing more than she ever had before. Through mishap and misfortune, the songs that came out of the sessions were the duo’s light at the end of the ever-expanding tunnel. They decamped to L.A. to record with Nick Launay (Yeah Yeah Yeahs / Arcade Fire / Nick Cave and the Bad Seeds). He pushed them to explore these new worlds even further, and as such the the after-effects of Laura’s motorbike tragedy can be heard throughout ‘Get Tragic’ – more melodic and synth-led than any of the band’s records to date, it embraces electronics and nuance in a way their stripped-back and stomping two-piece rock sound of old never could have.

“That was where it started to make sense,” says Steven. “It was like, ‘How do we combine our songwriting with electronics and keyboards?’ We wanted to have the soul of a rock band, but change the style so it was more interesting, more groovy, and more sexy – and less like everybody else! I started to feel like all rock music around us was one shade of one colour.” Laura agrees: “I really find the music industry, and just culture in general, has a sheep mentality. Like, ‘Is it okay to like this?’ You just need to have a mind of your own. Whether people like it or not, we’re at least trying to do something that isn’t ‘of the moment’ or whatever.”