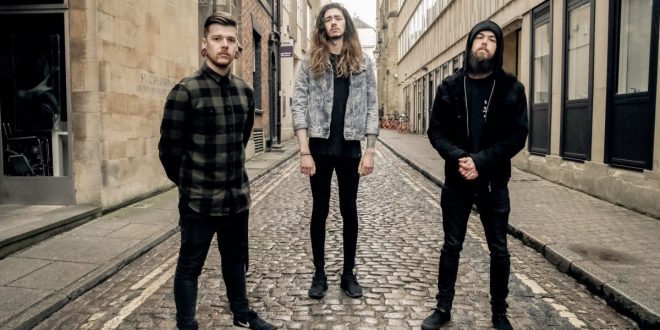 Hardcore band MSRY don’t know when to quit. Not content with releasing brand new EP Safety First, they’ve also just finished a co-headline UK tour with their friends in MTXS. Since it’s been a busy few months for the Oxford trio, there’s no better time to sit down with them and reflect on their recent incredible achievements, and find out more about them.

How did you guys start out?

“We are all came from various Oxford bands before and we were all at a loss of what to do after they’d all fizzled out. Keir approached Kial with the idea of doing a Hardcore band that put a major focus on a live show filled with energy and attitude and from there we enlisted Charlie on guitar duties to create what we have today.”

You describe your music as “misery infused hardcore” – What came first?

“From a band point of view we’d all been interested in Hardcore music, but there wasn’t a chance for any of us to really pursue it. But when all of our lives started to descend into a sudden state of misery and unhappiness is where we found the solace in Hardcore music and a need to create something from it that combined both.”

Why did you want to combine these two aspects into a music genre?

“Where we were all at in our lives when we first started the band, the misery was a catalyst for us to create music; it was the driving force for us. It was cathartic in its own way, being able to be in this safe space of chaos that we’d made for ourselves. I think it helped draw people into us because everybody feels misery, everybody knows that it feels and they can relate to that.”

Your new EP Safety First came out last week – how has that gone so far?

“We’ve been so excited for everyone to hear the new EP since we finished it. We’ve been sat on it for about six months just waiting and waiting, and it’s paid off by the looks of things! We’ve had some incredible feedback from reviewers and fans alike so far. It’s all coming up roses right now.”

There was a lot of negativity fed into the creation of this EP. Has releasing it been a much more positive experience?

“Once you’ve been in that negative space for so long, it becomes easy to not see any of the positivity that you’re creating from it. But thankfully for us we’ve gotten a lot of things off our chests that’s made this release a much more positive experience for us. But we’ve still got plenty of negativity left in the bank for the future.”

What inspires your music more: personal experiences or social commentary?

“It’s definitely a mixture of the two. At the moment we’re experimenting with social commentary in the form of politics. ‘Trump Card’ and ‘Freedom’ is about the injustices we have on both sides of the pond with our countries leaders. Though we’re still a band that can take from personal experiences and create a positive message from them.”

You’ve just finished a run of dates supporting your release. Did you have fun on the road?

“We had too much fun on the road, we really did. We’ve loved hitting the road with the guys in MTXS. They’re one of the best bands we’ve even played with, and some of the most hospitable and nicest guys we’ve had to chance to meet. From traveling up and down the UK, causing chaos at venues, and even taking a day out to take in the scenery of the Lake District, this tour was amazing from start to finish.”

How did this co-headline tour come about?

“Our manager approached MTXS with the idea and luckily enough they said yes. We’d been brain storming ideas of which bands we wanted to do the release tour with. Somehow we came to the conclusion these were the only guys we all agreed that we wanted to do it with. Thankfully for us they said yes!”

“We’re getting back on the road as soon as possible, that’s a must for us. We hate standing around for too long in one spot.”

Safety First is available now to stream and buy.

Keep up with MSRY on social media to be the first to know when they’re back on the road:

Watch the video for “Safety First” below: