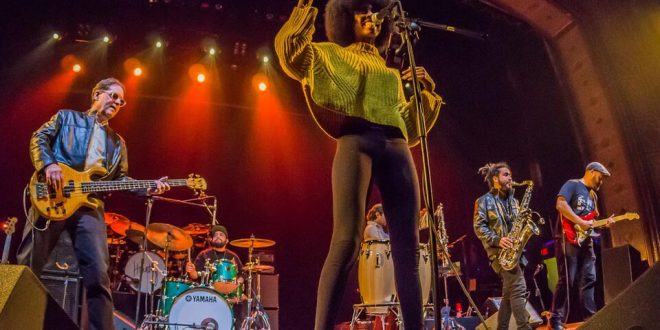 A lot of us don’t expect much when we listen to a cover song, especially when it’s a cover of a band that has a legend larger than life itself. But proving that covers can be as original and creative as their first incarnations, Project Grand Slam and multitalented singer Ziarra Washington pull out all the stops with their awesome cover of The Who’s classic “I Can’t Explain,” from their new record Trippin’, which comes out this month and promises to be one of the most talked about albums of 2018. In a flawless homage to the eccentric songwriting of Pete Townsend, Project Grand Slam reinvent “I Can’t Explain” as a fiery jazz track punctuated with feverish drumming and sax parts the push sonic limitations right over a cliff in a glorious display of audio domination. Accompanied by a stripped down music video that focuses on the band and their charismatic visual persona, I can honestly say that although I never expected to say this, the best single that I’ve heard this year may well be a song that originally debuted in January of 1965 as a seven inch.

In a lot of ways, The Who are responsible for laying the foundation for the very sort of experimentations that crossover bands like Project Grand Slam make their living with. Townsend is arguably the most cerebral and distinguished rock songwriter of all time aside from the duo of Paul McCartney and John Lennon, and it’s very difficult to imagine modern rock n’ roll without the influence his elaborate compositional approach had over both his and subsequent generations of artists. Ziarra Washington gives a superstar performance behind the microphone, channeling Roger Daltry’s illustrious sway and bucolic attitude that defined an entire genre of music, but none of what she does here feels derivative or retrospective. If anything, she’s adding her own seasoning to a track that showcases this band’s unique layers of amplified bliss. Even if people weren’t familiar with her before this record, Washington stands to become a real staple of pop music going into the future if Trippin’ reaches the mass audience that the group’s backers are hoping for.

If there is one thing that Project Grand Slam knows how to do better than anything else, it’s how to make music that inspires us to shake and dance while also stimulating us intellectually and aesthetically with its colorful detail and calculated instrumentation. It’s songs like this that make me really excited about where music is going in right now, and all of the potential for exciting new music that they signify. I hope that Project Grand Slam and Ziarra Washington are here to stay for the long haul, because right now I can’t think of anyone making as mesmerizing beats and harmonies as they are at the moment. Trippin’ could be a turning point for pop music in general, but I have no doubt in my mind that it’s going to be the biggest jazz release of the latter half of the 2010’s.

Stephen Vicino is the founder of MusicExistence.com. He created this site to give talented musicians a voice and a way to be discovered.
@@svicino
Previous Introducing: Hannah Featherstone – “Quirky Pop Riffs and Off-Kilter Jazz Beats”
Next Interview: MSRY