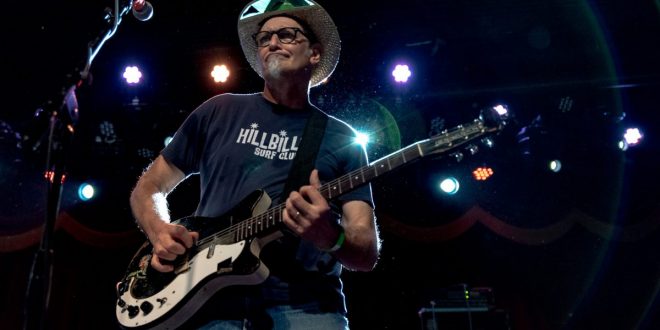 Saturday night North Carolina’s Southern Culture on the Skids served up a greasy double wide portion of country-fried garage rock to fans at the Brooklyn Bowl. With their eclectic mix of psychedelic surf rock, country, and R&B mojo the southern trio of Rick Miller, Mary Huff, and Dave Hartman gave their fans an hour and a half long set of songs that covered everything from Voodoo Cadillac’s to fried chicken. The trio grooved their way down a Dirt Road in a 69′ El Camino to the House of Bamboo to raise their Freak Flag and eat some Banana Puddin’. After fans joined the trio for an Eight Piece Box on the Devil’s Stomppin’ Ground, a Firefly was spotted and it was time for the band to take their Dirt Track Date to hunt for Cheap Motels in Soul City.

FOE MORE ABOUT SOUTHERN CULTURE ON THE SKIDS VISIT:

NewYork Based Photographer. Music Enthusiast with a background in Graphic Design. Whether I'm shooting a live event or just out wondering the streets its about capturing the moment.
Previous Album Review: Farewell to Fear – Voices
Next VOID VATOR Release Official Music Video for “UNTIL IT’S GONE” & Announce SOUTHWEST EXPRESS SUMMER 2018 TOUR

In the music video for her new single “You Are,” singer-songwriter Christina Morgan-Diaz shows off …