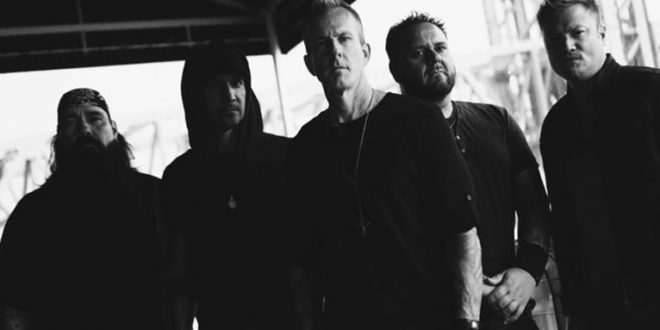 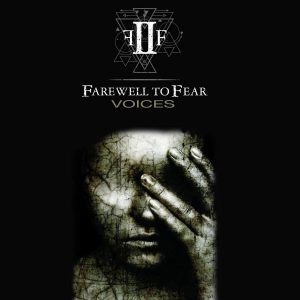 Farewell to Fear fares as another promising act in the midst of modern rock’s continually relegated presence. The quintet’s primary intention focuses on filling the millennial void, wherein rock music had been deterred by a plethora of erstwhile pop culture focus. Forming in 2010, the band draws on the monster riffs and memorable choruses of years past – almost like a vision of how the middle of the 2000s would have sounded had modern rock kept a healthy turnout in the mainstream. Their latest album, Voices, is a solid example of how such tenacity is still recognized, in spite of challenges that have persisted within the genre.

Opening on the title track, I appreciated their more direct approach to heaviness as compared to their previous album, New Blood. Stylistically, this album centers around darker, down-tuned riffs and pumping drums. The verses contain clean textures complemented by equally bold bassline in a balanced fashion. Upon reaching the chorus, there’s decent hook factor within the vocals and chord sequences, supplemented by a resonant call-and-response interplay. From the approach of the tracks to follow, “Wake Up” and “Let Me Go,” I further sensed a theme of one slowing to both an internal physical crawl, all the while their lives progress at an unending pace. The jagged metal riffs suit both songs quite well, and the vocals continue to ring with carefully integrated harmonies as they progress. It is at this point that the choruses maintain their prowess, but they come across as especially effective in the way the production is handled. Prolific musician Damien Starkey serves as co-producer, and together, he and the band champion a sound that may have polish, but with a seldom-utilized vibrancy that benefits the presentation throughout.

After a refreshing rise in momentum from the punk-inspired “Misery,” the album returns to an alternative metal foundation with “Your Cure,” a highlight track that initializes its midpoint. Based on the turn of events, its as if the subject of the song has experienced the worst extent of treatment. In turn, they reach a state of numbness after being exposed to such constant toxic repetition from who they otherwise hold dear. It covers a bizarre situation, wherein the main subject’s suffering is the other’s fuel, and completes that sentiment with a big signature chorus. “Waiting for Sunrise” further expanded on the feeling of internal constriction, with bleak, wispy clean vocals complementing the guitars during the verses. I felt these tracks work particularly well together given their thematic cohesiveness thus far, as it seemed like a sensible spot for their placement in the album. A triumphant note is expressed on the track “Broken Wings,” with battle ready riffs and sentiments of temerity and resilience flowing through. Both the clean and the more prominent gang vocals work well in this instance given the song’s mostly straight-ahead structure. Lulling from this surge of energy, the album is brought down to a midtempo by way of “Underneath My Skin,” its carrier single. Like a lot of newcomers to the band, this song was my introduction to them. It is by far the best track on offer, featuring the necessary components that justify a single’s potential – and all done reasonably well. I found the penultimate track, “Dead Generation,” to serve its purpose similarly. On the surface, it plays like a decent follow-up single, but thematically speaking, it represents the lowest of the low – a seemingly impenetrable boundary that keeps us motionless and deprived. “Take Me Home” caps the album on a somber note. While the mood switches to a more intimate acoustic register, there’s a bittersweetness to the theme that effectively interprets two outcomes – one where the subject is alive and in safe hands, free from harm, or another where their freedom is similar, only the soul has passed on.

Overall, Voices is a succinct, heavy-hitting milestone in the band’s career. Nearly a decade on the scene, Farewell to Fear continues to improve their sound, while maintaining a clear thematic focus that still leaves room for interpretation. Modern rock has surely come a long way from its prior heyday, but it has stood strong, and will keep striving onward.

I come from a family who is passionate about all things music. I learned to sing at an early age, and by 13, had my very own Fender Strat guitar. I tried my hardest at learning all that I could. Because I was born with cerebral palsy, I had to teach myself an adaptive playing style. I learned to write and record my own music, despite these difficulties. In college, I started making great use of my writing abilities by reviewing music, as well as copy editing. I guess it's best to stick with what you know, while welcoming a fair challenge at the same time.
Previous The Uruguayan band is on the final stretch of their major national tour through Mexico presenting their acclaimed album ‘Suenan Las Alarmas’
Next Gallery: Southern Culture on the Skids at Brooklyn Bowl Brooklyn, New York 6/23/18