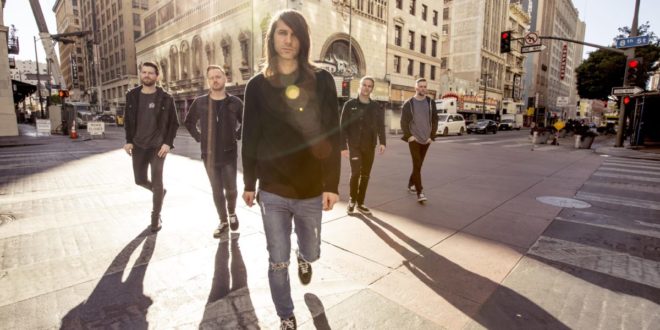 If you got into the Dogtooth Stage on Friday at about 6pm during Download Festival 2018, consider yourself very lucky. I tried, I even arrived ten minutes before Arizona metalheads Blessthefall were due to take to the stage. Even at that time, however, the tent was packed to the brim and indeed overflowing. Disappointingly, I was resigned to sitting on the grass outside the tent to listen to their set, occasionally stealing glances at the stage through the writhing throng of people. Despite not seeing the show as much as listening to it, I was very excited about the sounds I was hearing and just grateful that I got to experience a Blessthefall show even in this very restricted way.

Cut to a few hours beforehand: I was in the press tent with Blessthefall’s vocalist Beau Bokan and guitarist Eric Lambert, ready to chat with them about their upcoming shows and new releases. After getting slightly sidetracked by discussing what we had for breakfast (Beau had porridge from Starbucks, if anyone really wanted to know) it was down to business and looking forward to their highly-anticipated set:

Eric: “We’re excited. It’s the first show so we gotta take it slow and calm those jitters. It’s Download, it’s a big deal, so we don’t wanna fall off the stage.”

I’m grateful for the top advice for performing on stage during the infamous metal festival.

Importantly, Download Festival was their first show kicking off the European run of dates to promote the release of their sixth LP, Hard Feelings. At the time, I’m not sure the boys had any idea they would be so well received by the Donington Park crowd. (Beau even tweeted that the set was almost cut short because of the wild atmosphere over at the Avalanche Stage.) Instead, they were banking on these festivals to judge the reception of new music:

Eric: We got a couple of European festivals and some headline shows. At the moment we’re focussing on coming back and headlining. That’s our big goal–that after we play all of these festivals that we come back and play a longer set. We’re just gonna see what groundwork we can get laid out for us.

Eric: “This tour is a deciding factor so if it goes great then we’ll be coming back.”

Hopefully, they enjoyed themselves over here enough for us to get another chance to see them before too long.

Unsurprisingly, “a lot of feelings that were hard” was the main fuel for the new record. But they managed to make something that sounds great out of these difficult times. Something a little different, but very exciting to listen to:

Beau: “I think it was a bit of us really wanting to step outside our own box with the writing. Eric and Elliot write all the music, then they send it on over to me and I have to not fuck it up. So just as I was getting the songs and sitting with them and I was realising like, “This is a really cool sound.” Then we met with our producer Tyler Smith who really took it to the next level. He added even more electronics. Just writing songs with him took our songwriting to the next level and pushed us. Especially me, he pushed me as a vocalist.”

A couple of tribulations often help shape the sound of albums, so it’s a comfort that something good can come out of negativity. Hard Feelings wasn’t so cut and dry either, since a lot of the joy they got from writing their new music came from constantly reimagining and adapting their work:

Eric: “It kept feeling like we were going forwards and backwards on songs We’d go back to the studio and start over on the same songs. But it felt cool to start rebuilding songs that we were so sure that were done. It’s always fun to have someone else’s opinion and to bounce ideas off of Tyler, and have those creative juices flowing in the studio. We did exactly what we wanted. We didn’t hold ourselves to any kind of staple or to sound a certain way… It just all came together and it’s awesome.”

And not being so tied to one specific sound means that it’s inarguably their sound: they’ve created the best album they could have come up with in the way that they wanted to make it.

Eric: “Some people will say it sounds so different, and some people will say it sounds exactly the same. It depends who’s listening. I would say for us it’s not too far out of our realm, like it’s Blessthefall, but you can tell we tried to do something different and you can tell we put a lot of effort in. We put a lot of thought into our songs and just tried experimenting, and we did what we wanted.”

As long as the music a band puts out is authentic, I’m happy with any changes and developments in sound. And it seems like Blessthefall are enjoying themselves too. I do hope I see more of them in the future.

Catch Blessthefall on their upcoming US tour: 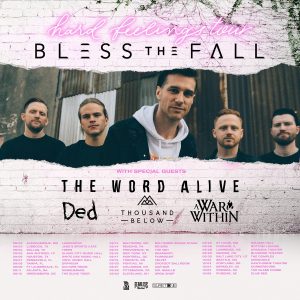 Freelance arts, culture, and music journalist. Lots of words and some radio. Studying for an MA in Media and Journalism. Trying their best.
@lozreviews
Previous Interview: VISTA – “Tour is a weird process. You drive a lot to hop on stage for 30-40 minutes every night, but I can’t see myself doing anything else.”
Next Interview: Mayday Parade @ Download Festival 2018