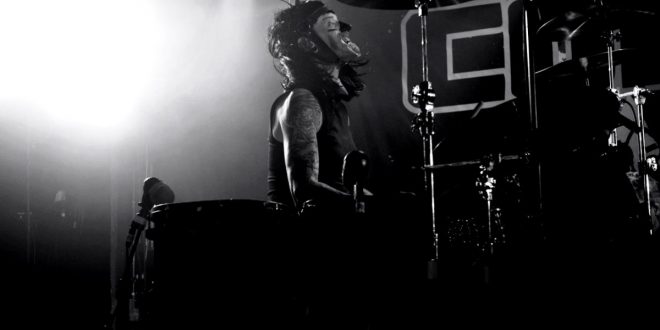 Combichrist is currently headlining the Everyone Still Hates You Tour throughout the U.S. with support from Wednesday 13, Night Club, Prison, and Death Valley High. When this tour was announced a few months back, to say I was thrilled would be an understatement. Now having said that, I will try to remain unbiased with this review… and most likely fail, terribly. Whatever.

Driving down to the Baltimore Soundstage in Maryland for my second of four shows, I found myself being super excited despite knowing the setlist. The anticipation was still there because that is what a well rounded and seasoned band like Combichrist does at every show. They make going to shows fun, exciting, and memorable.

Each and every single member of the band is enthusiastic and people thrive off that energy. Frontman Andy LaPlegua is constantly moving from one end of the stage to the other, belting every lyric with ardor. The ever-intriguing “Neutered Nancy,” drummer Joe Letz’s onstage persona is a sight to be seen. Between his peek-a-boo Elmo undies and open mouth guard, coupled with onstage antics like throwing drumsticks at fellow drummer Nick Rossi, entertainment is never lacking. Guitarist Eric 13 is always interacting with the crowd between backup vocals and shredding like crazy. Keyboardist Elliott Berlin, sandwiched between Letz and Rossi, holds his own and makes the keyboard look cool. Throughout the set he’s jumping off the drum riser and beating the keys into submission while also doing backup vocals. Acrobatics, I swear. Unbiased I am not.

Is this band fun to watch? Yes. Do they make you forget about what is going on outside the doors of the venue? Yes. Will your boss like them after you come back to work barely coherent from exhaustion and demanding to leave early because you have to make it to show number three? Probably not. But who cares? I don’t!

There are still a handful of shows left on this tour heading west. Go rock out with them if they have a stop near you.

To find out more about Combichrist click on the links below: