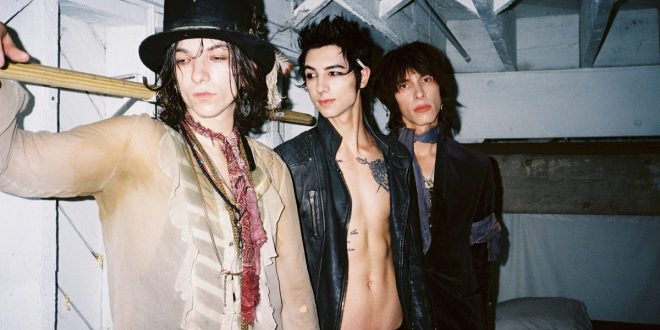 After their debut album, Boom Boom Room (Side A), and an appearance on the soundtrack to the film American Satan, Las Vegas fashion art-rockers Palaye Royale are growing their fanbase bit by bit. As they’ve recently announced their UK/European tour, and are about to embark on the final Vans Warped Tour, we chatted with the band at Slam Dunk Festival about their upcoming performance, and their next album…

The band are headlining the RockSound Breakout Stage – how is that for you?

REMINGTON LEITH: I’ve had breakouts since I was a teenager, I’ve had clear skin since using ProActive!

S: It’s been cool, we did the cover for RockSound in January, and this is only our 2nd time in the UK; last time we were here, we headlined, and we had sold out, which was cool, so we’re excited how tonight will be. This is our first time in Leeds, so we’re taking it in, and we’re gonna play a good rock show.

Speaking of, what do you think of Leeds City Centre?

S: It’s beautiful! I think we’re right next to a college, or in a college right now, so that’s dangerous for a rock band!

Boom Boom Room (Side A) was released back in 2016; when can we expect Side B?

S: We were just home for a week and recorded Side B. We’ve had the songs for some time, but the first initial recording process was kind of like way too discombobulated, and we weren’t enjoying what we were creating, so then we had to come back, and we did the whole thing; start afresh with a new producer. I’m super excited for it to come out, because there’s lots to come out after that. We’re kind of making a 5 year plan right now.

R: It’s been a fucking process, but I’m glad we were able to redo the album, we had to do it right. It’s gonna take a little longer, but it’s gonna be worth it.

S: It’s like a 3 course meal, how long the album was, so for Side B, we just want to make a really good dinner. ‘Cause someone said stop making entrees for your albums, and make a good sandwich!

R: It is gonna be a good album.

Any surprises in store for your performances?

R: Oh tons! It’s gonna be so surprising, I don’t even know what’s going to happen!

S: It is gonna be a bit crazy, I am excited for it.

You also recently announced a UK/European tour for later this year – you excited?

S: Yeah, we’re excited, it’s gonna be great. We have a 3-400 cap for our first initial show in London to do in KOKO; it’s a very ambitious move but hey, we’re ambitious guys!

R: There’s just something about British audiences that’s just so much fun to play to. I dunno, you guys just automatically take to rock music, and you’re not afraid to just have a fucking good time, and that’s what I love to see. Americans can be very particular about how they’re seen, and are like “Oh, but what if somebody judges me?”, but you guys are drinking at 11o’clock in the morning like “Let’s have a good fucking day!”, and I love that, so I’m more excited to play to more British audiences.

S: I think it’ll be good ‘cause we’ll be doing the final Warped Tour – I love festivals ‘cause this is kind of like a pre-Warped Tour.

Remington, your voice was recently used for Andy Biersack in the movie, American Satan, as well as the soundtrack including the song “Mr Doctor Man”; how was that for you?

R: It was an interesting experience. Metal’s not my go-to genre, but it was the first time I sang it. It got us some more fans though, and we’re happy about it.

Finally, after Slam Dunk Festival, Warped Tour, and the upcoming UK/European tour is done, what’s next for the band?

S: It’s gonna be a process until then!

EMERSON BARRETT: We’re doing this tour, and then Vans Warped Tour in the summer, so we have 180 shows left for this year, which is fantastic, very tiring.

R: We love playing acoustic shows too, so technically for me, it’s like 300 shows left!

Boom Boom Room (Side A) is out now! UK/European Tour Dates below – tickets available at their website