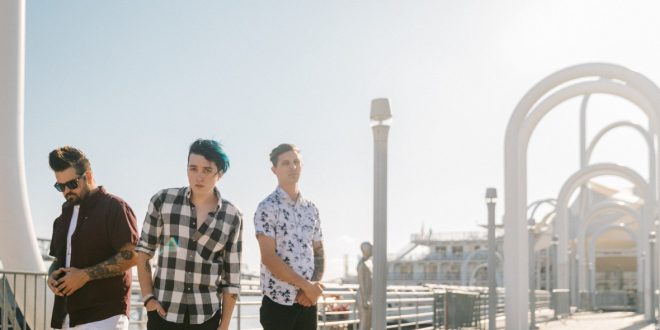 Interview: Julian Comeau of The Colour You

The Colour You combines vivid, introspective subject matters with a complementary instrumental force. Recently, the Baton Rouge, Louisiana alt rock trio (Julian Comeau, Bemo Barnett, and Robbie Buisson) debuted the music video for their carrier single, “Set Me Free,” earning especial exposure through Alternative Press’s Facebook page. The single is to be included as part of their debut album, which is still in the works.

I caught up with front man Julian Comeau to discuss his musical background, the concept involved in the band’s name, as well as what fans can ultimately glean from the music as a whole.

ME: Growing up, what types of music helped develop your musicianship?

Julian: It’s funny because, at first, I started listening to Green Day, Blink 182 and a bunch of pop punk bands. Then, I got into musical theater and performed as a kid. From there, I switched to the ‘more pop’ pop punk bands. I’d credit All Time Low with crafting my voice for the last 15 years.

ME: You did theater as a kid, is that right?

Julian: Mhm! I dropped out of high school to work as a theater actor.

ME: I bet having that background gave you the push to work professionally with bands, as well.

Julian: Oh, absolutely! It helps a lot, especially with auditioning for bands and working on my own material. Just knowing how to read harmony was a big thing that a lot of guys didn’t know how to do. When I came into the studio it was like a breath of fresh air, because I have worked with a lot of singers who don’t know how to write, at all, as far as arranging vocals go. In musical theater, you’re taught all these big choral numbers, so you have to develop a knack for it. That’s something that I’ve really taken with me. Also, just taking care of yourself. If you’re performing eight shows a week in a musical, it’s kind of the same as touring. You have to be conscious of where the others are.

ME: You formed The Colour You around two years ago. How did you guys get started?

Julian: The band originally came to be through the Internet. Beamo, our guitarist, had mixed our Halsey cover [with American Avenue], which went viral on YouTube. So, I had known Beamo through that connection, and then when his band was going in a new direction, he hit me up and was like, “Hey, do you want to fly down to Louisiana and try something?” and I was like, “Okay! Let’s just see what happens.”

I flew down, and that was about a year ago now, and we’ve been going ever since I got there, pretty much. It started that I was just going to be there for two weeks, and I ended up living there for eight months. We’ve just become this big ol’ family. It’s cool (laughs)!

Julian: It’s definitely different from California. The people are really nice. The food is delicious — everything is fried and fantastic. And you can’t beat the seafood. In California, it’s good for a good second, but there’s nothing like crawfish here.

ME: In terms of you guys all getting together, where did your band name originate from? It sounds deep — plus, that British spelling!

Julian: Yeah, the obnoxious spelling as I like to say (laughs)! We had a couple different working names, and at one point, there was this song idea called The Colour You. It was about having this infatuation with someone, when you’re so obsessed with this person that you eventually see them in everything, and they become, in essence, a color. That idea ended up being something we didn’t move forward with as a song, ironically, but we liked having it as a band name. Beamo was like, “Why don’t we just do that?” (Laughs)!

ME: That’s definitely an important factor in your music, and we’ll get to that in a moment. First, though, what initially struck me was your sound. I think what you guys end up nailing is that heaviness, but with a balanced sense of polish. How was production handled?

Julian: We mix and master it all on our own; either myself or Beamo sit at the computer and crank it all out. We did have some writing assistance with our friends Kile Odell and Josh Landry, out in North Carolina, on some songs, but mostly everything you hear is something we wrote.

ME: Getting to “Set Me Free” and its concept, as you’d mentioned, it has to do with being obsessed with someone you’re in love with, to the point of seeing them as more an invigorating, colorful entity. Tell me a bit more about that.

Julian: Yeah. “Set Me Free” is a really interesting song. Imagine your guardian angel came down to earth and she had to save you from this eternal damnation. Or, maybe you fall in love, you know? There’s this twist in the relationship where you feel she can save you, but you start to recognize that it’s built on precarious ground, and it’s not only a question of whether they choose to save you, but if they’re ready to. The song is strangely introspective that it’s less about “can you set me free” versus “can I allow myself to be set free.” It’s dealing with the fact that you’re lesser than that person, and whether they’d be willing to suffer through that with you.

ME: From what I gather, it represents those thoughts that race through your head once you’re vulnerable with that person. You put them in such high regard, but you’re also very weary of them.

Julian: Absolutely. Yeah. Logically, you know that you shouldn’t put them on a pedestal, but they’re already there, and you see them as your saint, or soulmate. But you can’t help that (laughs). You can’t help but say, “Oh, wow, they’re so incredible and amazing!” That’s why I wrote that song; it deals with a lot of different, complicated ideas.

ME: It’s definitely something I’ve gone through at some stage. Was this something you went through personally, too, and if so, how did you get through it?

Julian: I’ve been through, ironically, both sides of it: the person who’s oblivious, and the person who’s head-over-heals infatuated with them, when they aren’t so sure themselves. There’s all different layers of that.

I’m sure most band guys have had an emotional relationship story (laughs). But what I found with my life now is to appreciate who I am and what I can offer someone. That really saves you a lot of hurt and pain; especially young love, because that’s such a strange time, when you really don’t know yourself, and you want to know all about this new person who doesn’t know about themselves either! I just try to be at peace in knowing that there’s no right way to do it.

ME: And once you’ve gone through it, you come back 100 times stronger!

Julian: Absolutely. You’ve got to fall in order to pick yourself back up again, and then be like, “I should NOT have tripped over that (laughs)!” That’s the learning curb of life.

ME: Where might the song fit in the context of the album?

Julian: I think a lot of this first record is going to be exploring the concept of love. That’s something that’s been on our minds as musicians with people in our lives, you know? We are all in different spots but moving forward. I’m recently single; Beamo and Robbie are buying houses. They’re kind of locking it down in their relationships, whereas I’m in a different part of my life —more visceral and a little less easy (laughs)!

We have a lot of songs pertaining to love, the loss of love, and the questions around them in general.

Julian: Thank you for all the support so far. If you like the sound of “Set Me Free,” there’s a lot more songs like that, and if you’re looking for something a little heavier or poppier, we have so many great songs that I just cannot wait to share. I think you’ll really, really like them, and I hope you do.

I come from a family who is passionate about all things music. I learned to sing at an early age, and by 13, had my very own Fender Strat guitar. I tried my hardest at learning all that I could. Because I was born with cerebral palsy, I had to teach myself an adaptive playing style. I learned to write and record my own music, despite these difficulties. In college, I started making great use of my writing abilities by reviewing music, as well as copy editing. I guess it's best to stick with what you know, while welcoming a fair challenge at the same time.
Previous Interview with Palaye Royale at Slam Dunk Festival 2018
Next Gorillaz Team Up with Jack Black in New Video for “Humility”

Mauri Dark is basking in the light right now…His debut solo album, “Dreams Of a …