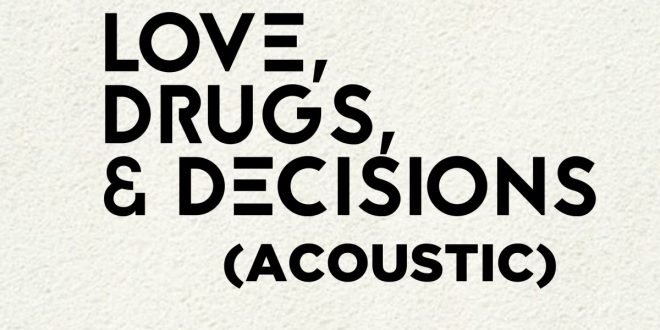 New York based singer-songwriter, Caleb Hawley, released an acoustic version of his album, Love, Drugs & Decisions. In addition to having a raw “demo feel,” the album features several duets with Hawley and musicians he knows (see full track list below). I had the chance to ask him a few questions about the album and his plans for the future.

1. What was your inspiration for making this album?
I realized that I’d done very little collabs in the past 10 years of making music. I wanted to change that, and thought this would be a fun way to do it. I also liked the idea of having a stripped down version of the songs, because it make the lyrics more prevalent.

2. Can we expect to see some special guests helping you sing at your upcoming show?
I hope so! At least some that live in NYC. Depends if they’re up for it I guess…

3. What are some of your favorite lyrics from this album?
I Choose, Thank You, & Addiction are the most personal so they’re more important to me. It’s tough to say my exact favs though, cause quoting myself feels weird… I did hear Stevie Wonder quote himself once though, and it was awesome.

4. Are there songs you like better now that they are acoustic and done as a duet?
I really liked how Goodbye w/ Lohai turned out. It’s the biggest departure from the original so that may be why. I think I like Dive Bar a bit better being solo.

6. If you could do a duet with anyone alive or dead, who would it be and what song would you choose?
Wish you were Mine with Celine Dion.

7. What do you want people to know about this album?
That I don’t intend to be an “acoustic” artist now…. I thought it’d be cool to have demo versions for people to enjoy, but I still plan on using more of my production chops for my next release.

8. If this album was an animal, what kind of animal would it be?
A shaved black bear. Has to be shaved though.

9. What’s next?
I’m touring a bit, playing when people ask for the most part. I’m going to put out some vids this summer, but mainly work on the next release. The working title is “Sad People”. It’s going to be a collection of songs that depressed peeps can lyrically relate to, but the music will still be danceable.

Fun Loving Music Photographer and lover of live music in general. I am most likely to be spotted with a coffee in one hand and a camera in the other, somewhere in Philadelphia, New York City and everywhere in between. For more of my music photos: http://myphotos.bellemorephotography.com/
@bellemorephoto
Previous New Single “Waitout” Drops From A Shoreline Dream
Next BLACK COFFEE Release Official Music Video for “I Barely Know Her” Debut Album, Take One, Out NOW!