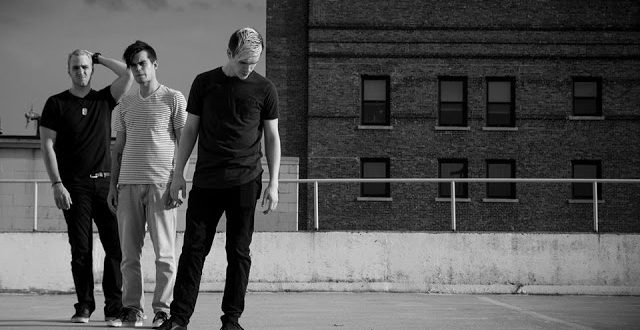 Niles, Michigan’s 45 to Argos are a trio loaded with potential. Forming in 2015, the young band honed their musical chops while in college, creating a sound that craftly fuses pop accessibility with alternative merit. Currently, front man Brandon Garrett, bassist Brandon Cromer and drummer David Lowe have solidified that standing with a video for their latest single, “Dreamcatcher.” Much like their sound, the video emphasizes their carefree nature, but also a daring, unhinged focus that has carried them thus far.

While catching up with Garrett, we discussed his formative influences, the writing and chemistry within the band, and the hilarity in the visuals of their new music video. Initially, I’d planned to chat with Garrett only, but as it turned out, all members were present.

ME: Let’s start with your formative years in music. When was the first time you listened to something you could really identify with?

Brandon G: Personally, I would say Green Day’s American Idiot. They’d had a lot of hits on the radio from that album back then, and I was like “Wow, this is really cool!” It’s pretty much what made me want to become a performing musician.

ME: What was it about Green Day that stuck out to you in that moment?

Brandon G: It was definitely a different kind of thing they were doing. Back then, I was listening to Ozzy and Metallica, mainly. Once I listened to them, though, their sound was completely new to me, so it happened at the right time. Their stuff’s just really unique.

ME: Your journey in developing that musicianship started with guitar at age 11. Did you start with acoustic and then gravitate to the electric, or were you immediately looking to achieve a certain sound?

Brandon G: Yup! I started on guitar, which my dad had bought for me. It was electric from the beginning, and I didn’t get an acoustic until three years after that.

ME: How did it feel to plug in for the first time?

Brandon G: That first day with the guitar in the amp was just amazing! I never put the thing down. It was the happiest I’ve ever been at the time, because this was something I always wanted to do, and I felt so glad to finally do it.

ME: As it is told, you understood that greater opportunities were to be had once you started singing. How were those early attempts in striving to find your own, unique voice?

Brandon G: It took me quite a few years after learning guitar to focus on my vocals. I think I was maybe 14, 15 — something like that. It was frustrating for me in the beginning. You know, like how a lot of people don’t like to hear the sound of their own voice. I was no stranger to that when I first started. I wanted to be able to sing mainly like Green Day or Metallica, so I was upset that I wasn’t able to do that stuff right off the bat. But as the years went on, I’d gotten better and better.

ME: In late 2015, you met David. What was he initially like as a songwriting partner, and how have you guys solidified your friendship in 45 to Argos?

Brandon G: Dave and I met at college, actually; we’re both music majors. We met in a class that’s like a rock/pop ensemble, where we work with other musicians, a director that coordinates what’s going on, then a concert at the end of the semester, and all that good stuff. He and I were in different groups made up from students from the classes we took, but we’d really hit it off since day one. It was just one of those things that happened, where you can’t really explain how you met your best friend.

ME: Rounding out the sound is Brandon Cromer on bass. What have you learned about how the three of you function as a unit?

Brandon G: Brandon was really the last piece of the puzzle that we needed. For a while, we were trying out things with different people, but it didn’t work out; things would go wrong. We think the hardest part about being in a band is finding people you can not only make music with, but also your friend. And we were looking to have that close friendship. When we first met him, it was actually a very quick transition. We would hang out quite frequently and have never slowed down, so it was a very natural thing.

ME: Let’s say you had a musical idea, and the other guys just weren’t vibing on it. How do you guys help each other continue on the right path?

Brandon G: Hmmm, that’s a tough one. David’s here too!

David: Whenever we disagree on something, we’ll always try to find a way to work it out. There have always been moments in the middle of writing a song, and somebody doesn’t like how something goes, or how the words are, or chord structures. We usually work at it till we can find something to all agree on. During arguments, we’d ask each other, “If you don’t like this part, what can we do to change it?” Then, we bounce ideas off each other until we come up with stuff to play. We try to work together the best we can.

ME: Nice to meet you, David. It’s cool you’re both here!

ME: Each of you are welcome to give your perspective if you want.

ME: Let’s talk about your current single, “Dreamcatcher,” about turning dreams into goals, and not letting the hurdles get in your way. How did that song come about?

Brandon G: Dave and I were driving home from college, listening to music, and we just felt really inspired. When we got back, we sat down with our guitars, and started hammering out some stuff on the spot. I know within the first 20 to 30 minutes of just messing around, I came up with the chorus, which is what you hear on the final recording. We also messed around in our practice space the same day, and pretty much wrote half the song within the course of two or three hours.

David: We had most of the lyrics written in an hour and a half of us starting and then getting it to where it needed to be, but I think it turned out pretty decent.

ME: Thematically, the song goes both ways. You always want to push for your dreams, but on the other hand, dreams are weird and bizarre. They’ll continue to be until you reach that goal, and see it for what it really is.

Brandon G: I’m glad you picked up on that, because that’s what we were thinking too.

ME: I seriously thought of it as a hit rock song, which is rare to come by, especially nowadays.

David: Yeah, that’s really cool. It’s funny you say that, when we sat down to write it, we were like, “Okay, we’re gonna write a hit.” That’s what we said, verbatim, before we wrote it.

Brandon G: That was the bar we set for ourselves; we had to make the best possible hit we could.

ME: I found the music video hilarious — very simple and low budget. You directed that, Brandon, is that right?

Brandon G: Yup! I also had my buddy Chase Krueger out shooting it for us, so it was he and I looking to put this all together.

ME: I can tell it was a fun experience. Right about the breakdown on the song, you have all these 90s party tropes — silly string, vivid colors, and Dave with the hot dogs for drum sticks was the highlight!

Brandon G: Yeah, that video has no structure whatsoever! We went off the basic idea that we want to pursue our dreams. For a lot of people, that’s having the freedom to be yourself. We really didn’t want to constrain ourselves, and be a band that has to look cool like a bunch of rockstars, with leather jackets and all that stuff. We just wanted to make a music video that can be done in a day, and just have fun with it.

ME: In terms of your musical output, I know you have an EP out — XLV. How was that experience?

Brandon G: That EP came together over the course of, I’d say, a year and a half. This local producer had a home studio, and we went over to his place to record the songs. It wasn’t supposed to be a final product — just something to say, “Hey, this is us.” We wanted to make this kind of like a milestone. There were instances where we’d experimented with guitar and drum tones, and mic placement, but it was okay, because we were figuring out who we were as a band. I think because of all that experience in that year and a half, we became a much more cohesive unit.

ME: Will we see an album in the future, or is that still up in the air?

Brandon G: We’re thinking about putting together a second EP. We’re not going to do a full-length album until we get that out. We’re still experimenting and trying to figure out exactly what we like, as far as how we do songs live and while recording. So, definitely the second EP beforehand.

David: Thanks! We’ve had a lot of supportive people in our lives, whether they’re musicians or bands we’ve played with, or fans who’d share our stuff on Facebook, and show us a lot of love.

Brandon C: It means the world to us, honestly.

I come from a family who is passionate about all things music. I learned to sing at an early age, and by 13, had my very own Fender Strat guitar. I tried my hardest at learning all that I could. Because I was born with cerebral palsy, I had to teach myself an adaptive playing style. I learned to write and record my own music, despite these difficulties. In college, I started making great use of my writing abilities by reviewing music, as well as copy editing. I guess it's best to stick with what you know, while welcoming a fair challenge at the same time.
Previous In This Moment Release “Black Wedding” Video Feat. Judas Priest’s Rob Halford
Next LORDS OF ACID Announce Highly Anticipated LP, ‘Pretty In Kink’!