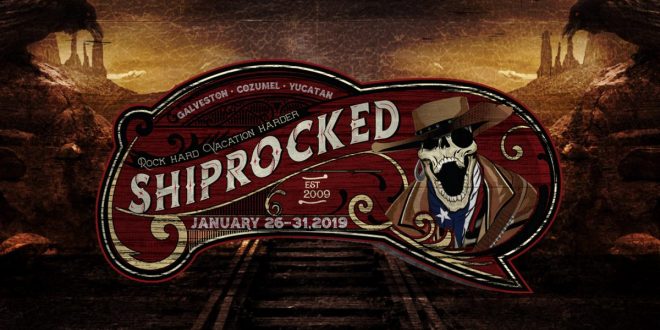 Shiprocked Cruise Gears Up For 2019 Voyage

Ask4 Entertainment rock cruise Shiprocked has earned the infamous title of “Rock Hard, Vacation Harder,” creating the ultimate vacation experience for rock music lovers worldwide. Fans who attended this past year’s venture had the opportunity to pre-book a spot for next year’s return to Cozumel and Yucatán. Those fans who pre-booked received their token spots for purchasing cabins next week.

Shiprocked is getting ready to saddle up (Western theme for 2019) for its 10th year, and general sale to the public will be on Tuesday, May 1st. Though the line-up won’t be announced til later this year, Shiprocked holds a “line-up guarantee” shall anyone choose to back out once the line-up is announced. (Trust me, you won’t want to.)

After blasting off from Port Canaveral, Florida onboard Carnival Liberty on January 21, ShipRocked 2018—“A ShipRocked Odyssey”—completed its sold out mission on January 25, led by Stone Sour, Seether, In This Moment, and Black Label Society, and joined by over 3,000 guests.

Long before returning, ShipRockers were already buzzing about the onboard announcement of ShipRocked 2019. The 10th edition of the greatest vacation ever expands to 5 days & nights, January 26-31, 2019 onboard Carnival Valor. Departing from Galveston, TX, ShipRocked 2019—celebrating 10 years of mayhem on the high seas–will include stops in Cozumel and the Yucatán in Mexico. The ShipRocked 2019 lineup and additional details will be announced in the coming months.

Seether got ShipRocked 2018 started with a rousing Sunday sail away set on the Carnival Liberty deck stage. Donning a captain’s uniform and an armful of silicone bracelets collected from his new ShipRocked family, Corey Taylor and Stone Sour closed the festivities (officially, at least) on Wednesday night under a moonlit sky. In between, ShipRocked 2018 made stops in Nassau and at the private island of Half Moon Cay in The Bahamas; fans—including R2-D2—enjoyed meet and greets with ShipRocked artists; and nearly two dozen bands performed, mingled with fans, and participated in a variety of artist-hosted activities and events.

At Half Moon Cay, P.O.D. and Otherwise boarded the pirate ship-themed beach stage for a pair of energetic performances while fans lounged in the white sands and splashed in the tropical Atlantic waters, and Red Sun Rising led a spirited Beach Wars competition.

Other highlights of ShipRocked 2018 included:

ShipRocked creator and producer Alan Koenig of ASK4 Entertainment says, “ShipRocked is simply the best vacation and the most incredible live music experience in the universe. Each sailing gets bigger and better, and SR18 was no exception. With our 10th year anniversary on the horizon, we’ve decided our amazing community of guests deserves even more. So we’re taking the cruise to the biggest state in the Union, and adding an extra day to the fun! We can’t wait to rock hard and vacation harder in 2019, y’all!”

Here’s a sample of what the press had to say about the ShipRocked 2018 experience:
“The recent ShipRocked 2018 cruise gave hard rock fans an out of this world experience, and not just because of its outer space theme.” –Liz Ramanand, Billboard.com, January 26, 2018

“Fans get a unique opportunity to meet and hang out with their favorite musicians year after year whether it is in the casino, the bar or the buffet line where there is a ‘family-like vibe’ that you only see on ShipRocked.” –Amy Harris, AXS.com, January 28, 2018

Produced by ASK4 Entertainment, ShipRocked is a once-in-a-lifetime experience that provides guests with the opportunity to vacation with their favorite bands, meet new friends, and reunite with old ones year after year. In addition to unique performances and musical collaborations, ShipRocked onboard and beach activities include photo meet and greets with band members, artist hosted events and activities, crazy theme nights, after hours parties and more. Loudwire calls ShipRocked “…a staple of the hard rock and metal event calendar [March 1, 2017].”

Check out the 2018 aftermovie: