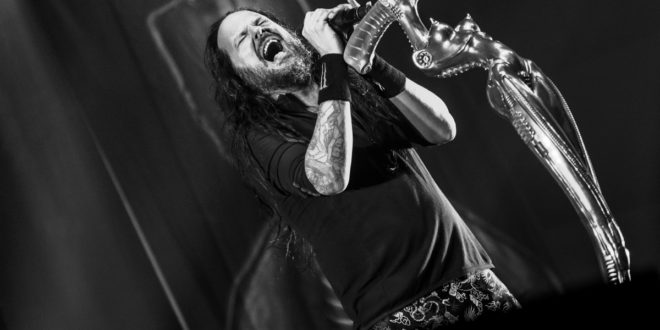 Jonathan Davis has released the video for “Everyone,” the second single from his highly anticipated debut solo album Black Labyrinth, set for release on May 25th via Sumerian Records – PRESS HERE to hear Davis’s unforgettable vocals, synths and commanding guitars, and PRESS HERE to watch the accompanying video that captures a jarring depiction of the dangers of “follow the leader” tendencies by extremist cults.

With the release of “Everyone,” digital pre-orders for Black Labyrinth have launched on iTunes, GooglePlay and Amazon – PRESS HERE to purchase. Fans who pre-order the album will receive instant-downloads of “Everyone” and the previously released first single, “What It Is,” which debuted as the #1 most added single on Rock radio. Pre-orders for the physical album are also available now, at jonathandavis.com or sumerianmerch.com.

Diverse and progressive, Black Labyrinth represents a natural evolution for the storied frontman of critically lauded rock band Korn, whose previous musical contributions have yielded two GRAMMY® Award wins, eight GRAMMY® Award nominations, worldwide sales of 40 million-plus, and countless sold out shows in nearly every corner of the globe. Inspired in part by the Ganzfeld Experiment, and the out of body experiences and hallucinations that often accompany it, Davis focused on religion, consumerism and apathy throughout the album.

Davis is no stranger to finding success while pushing the boundaries of music. Throughout over 20 years in music, his presence has coursed through film scores, popular video game franchises, and official remixes for the likes of Steve Aoki and more. Along the way, he has also lent his voice to tracks for everyone from Linkin Park to Tech N9ne.

Previous May the Fourth Be With You! Galactic Empire Announce New Album “Episode II,” Drop New Song
Next Gallery: The Big Pink at Metro Chicago, 3/30/18