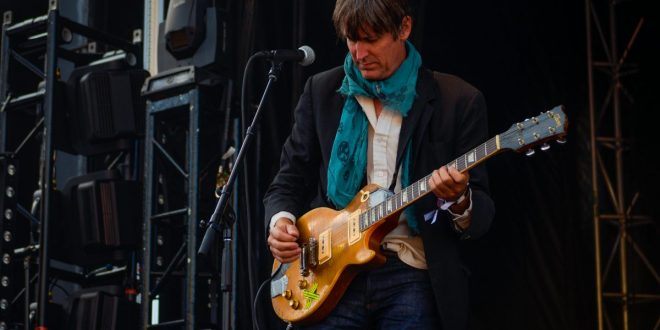 Stephen Malkmus & the Jicks’ new album Sparkle Hard will be released on May 18th on Matador Records and can be pre-ordered HERE. The band will tour North America this summer, hitting major markets including Chicago, Brooklyn, Philadelphia, Washington DC, Nashville, San Francisco, Seattle, and Portland, and the full list of tour dates can be found below.

In February, the band shared its twangy single “Middle America,” which, as Rolling Stone noted: “The former Pavement leader has given us hundreds of perfect Cali-gold guitar hooks. But the tender beauty of his latest with the Jicks is rare even by his high standard.” As a follow up, the band today shares another taste of the new album with the song, “Shiggy,” an insanely gleeful, old-school four-chord stomper.

Malkmus started writing Sparkle Hard in 2015. He’d upgraded his home-recording equipment and bought some electronic drums and had been working on the Netflix series Flaked (he penned the incidental music and the end theme song). Demos were done in one day in April of 2017 and then in May, The Jicks started recording at a new studio in Portland called Halfling, which is managed by multi-instrumentalist Chris Funk of The Decemberists, who produced the album.

Self-indulgent escapism has never been The Jicks’ bag, but on Sparkle Hard, the reality of modern life sits closer to the surface, communication cutting to the chase whether it’s a proto-punk grind or a back-porch country duet doing the talking. A cleaner burn for dark and complex times.