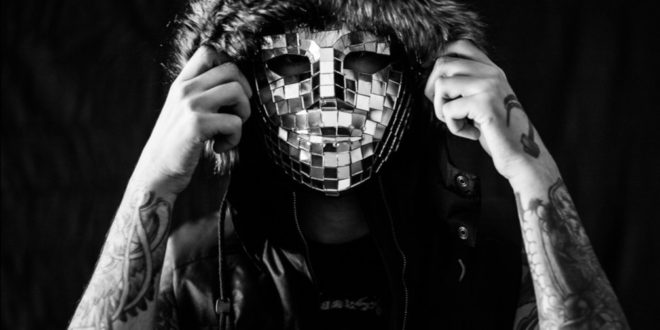 I chatted with Deuce about the making of Invincible, as well as anecdotes from his formative success with his previous band, Hollywood Undead.

ME: Your new album, Invincible, is coming out December 1st. Can you tell me a bit about how you’d came up with its concept?

Deuce: This album carries over from the stuff I did with my band, Nine Lives. I wanted it to maintain a spiritual sense, where someone feels like they have nine lives. That gives the notion of invincibility, in a way.

ME: In other words, it’s a natural progression.

Deuce: Yeah, definitely! A lot of lyrical ideas and hip-hop styles came from Nine Lives, as they were mainly a hip-hop group, but I feel I’ve learned a lot can do more from my time with them.

ME: Half of the album was written in Portland, the other half written in LA, and it’s like they encompass two opposite spectrums – one side is angry rock, while the other side is more tongue-in-cheek hip hop. How did you plan on implementing both elements?

Deuce: It was actually all spontaneous. When we first stopped in LA, we ended up working with rock elements, and with the same type of lyrical approach. But once we’d gotten to Portland, we started experimenting with cool beats and putting guitars over them, so it became a combination of the two.

ME: Normally, does rock come first?

Deuce: Yeah, for this album it did, but it depends. Sometimes, hip-hop starts the foundation and then rock comes after. But we like to switch it up. It can either be beats first and then guitar over that, or vice-versa.

ME: Throughout your career, Jimmy Yuma has remained your close collaborator. How did you find working with him this time around?

Deuce: It’s always been great! Jimmy has engineered me a bunch. He’s my guitarist and supports me in the studio all the time. We bounce ideas off each other, and just mess around with different styles of beats and guitars. I’ll try something and then he’ll expand it. Sometimes he’ll go make a beat, then I’ll tell him what might sound good for the guitar parts. Once I put a vocal idea down, we just go back and forth. It’s switching up the captain’s chair, basically.

ME: I’ve heard you mention your ideal tour being with Brokencyde and Cotton Mouth Kings. What drew you to those guys musically?

Deuce: They have a similar style of rap rock with kind of a party feel, you know? They definitely influence the fun side of Deuce. That’s what they’re all about – partying and having a good time.

ME: I remember with Hollywood Undead, you guys were like champions of social media way back when.

Deuce: Yeah, we blew up back on Myspace, and when the album Swan Songs went platinum, so many more people knew who I was. Then I just grew organically from there.

ME: Once Facebook became more dominantly used, how was transition to there?

Deuce: It was good! We had a bunch of people from Myspace who were fans of the old band start following us on Facebook, and then I gained a chunk of those fans on my own. It’s mostly Hollywood Undead fans, but also fans tuning into my music.

ME: Who were your main influences as you were starting out in your old band?

ME: Once you got bigger, which bands did you get to tour with?

Deuce: Back in the day, we’d played shows in festivals with both Eminem and 50 Cent. P.O.D was one band we toured with, and then Cotton Mouth Kings, Escape the Fate – bands like that.

ME: Do you feel like with the Invincible album, you’ve grown as a result of these experiences?

Deuce: Yeah! I think it represents all that stuff from the past, but with some new flavors in it.

ME: One thing I noticed is that you’ve prioritized not only staying in touch with fans, but you also have them influence what ultimately shows up on your albums.

Deuce: Yeah, I like to answer fans on Twitter, and if they have an opinion on something, they’ll tell me. I take a lot of notes on what styles they like, and what the track listing would be.

ME: In the end, it’s an album tailor made for them.

ME: Overall, how have fans responded to your new material?

Deuce: They dig it! They really like “Here I Come” and “World On Fire,” and so far, the response has been good all around.

ME: That’s awesome. I’m sure that response will carry over once the album is released. You excited?

Deuce: Thank you, and I appreciate all the support these last couple years.

I come from a family who is passionate about all things music. I learned to sing at an early age, and by 13, had my very own Fender Strat guitar. I tried my hardest at learning all that I could. Because I was born with cerebral palsy, I had to teach myself an adaptive playing style. I learned to write and record my own music, despite these difficulties. In college, I started making great use of my writing abilities by reviewing music, as well as copy editing. I guess it's best to stick with what you know, while welcoming a fair challenge at the same time.
Previous Check Out Modern Mimes’ Future Goth Take on Type O Negative’s “I Don’t Wanna Be Me”!
Next A Foreign Affair Release Official Music Video for “Passing Through”