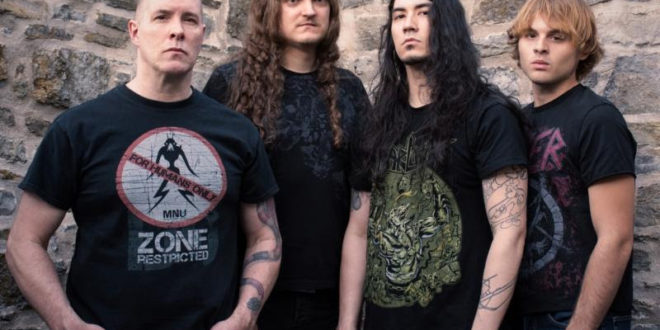 In preparation for their new album, For The Demented, Ottawa, Ontario’s Annihilator has followed up with an explicit accompaniment to its fourth track, “Pieces of You.” How this nature is delivered proves not only blunt, but wholly gruesome – from the perspective of a cannibal. Pieces, in this context, refers not to a heartache cliche, but literal human flesh. The band’s mastermind, Jeff Waters, thereby warns that the video “…contains a graphic interpretation of a true crime story that includes potentially disturbing images and lyrical content.”

But despite the song and video’s challenging content, Waters simply deems inspiration as its catalyst.

“We realize this is not exactly the most pleasant subject to write about, however, in the world of being a writer and musician, sometimes these stories can spawn a song!” Expounding on its theme, Waters states, “This is about a criminally insane guy who murdered his ‘annoying’ girlfriend to ‘silence’ her voice. He then eats pieces of her, as a means of keeping her alive inside of him. Yeah, crazy, but when you watch horror movies, crime shows and own a few Cannibal Corpse t-shirts, this is tame in comparison.”

I come from a family who is passionate about all things music. I learned to sing at an early age, and by 13, had my very own Fender Strat guitar. I tried my hardest at learning all that I could. Because I was born with cerebral palsy, I had to teach myself an adaptive playing style. I learned to write and record my own music, despite these difficulties. In college, I started making great use of my writing abilities by reviewing music, as well as copy editing. I guess it's best to stick with what you know, while welcoming a fair challenge at the same time.
Previous In This Moment Drop “Roots” Video
Next ASHES Release New Music Video For “Newborn Soul”