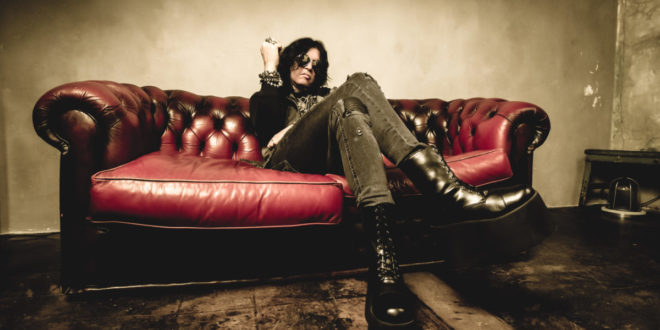 For over three decades, Tom Keifer has been best recognized as the front man for glam metallers Cinderella. The Philadelphia quartet achieved multi-platinum success in the mid to late 80s, bolstered by the success of such hits as “Shake Me,” “Nobody’s Fool,” “Don’t Know What You Got (‘Til It’s Gone)” and “Gypsy Road.” Even as the band slid from their early 90s plateau, Keifer’s heart was set on blues music, notably shown through their penultimate and final albums, 1990’s Heartbreak Station and 1994’s Still Climbing. Cinderella would stand strong since reforming three years later, although Keifer had often been keen on a solo project. Eventually, his ambitions would be fully realized by the release of his roots-driven debut album, The Way Life Goes, in 2013.

Now, slated for release in October 20 of this year, The Way Life Goes will be packaged as a deluxe edition. The set includes the original album (newly remastered by Richard Dodd), along with two new bonus tracks. Preorders will be in a six-panel digipak form, featuring 20 pages of unique song illustrations by Fantoons’ own David Calcano. Additionally, the package will come with a 30-minute documentary, The Way Life’s Goin,’ directed by Keifer’s photographer, Tammy Vega, based on the bonus material’s studio sessions.

I caught up with Tom to discuss the roots of his solo path, recording The Way Life Goes, as well as the factors that comprise its accompanying documentary.

ME: To start off, let’s go back a bit. As I understand, in the mid-90s when Cinderella disbanded, that was the earliest time you’d developed ideas for solo material. How did the initial direction for that material take shape?

Tom: You know, it was really just a work in progress. When you talk about Cinderella disbanding in the mid-90s, I was working on a bunch of stuff that sounded nothing like what’s on [The Way Life Goes] (laughs). That’s just sitting on the shelf somewhere. This stuff came later, and was a little truer to who I am, with a blues-like rock influence. But with the music from back then, I was in a really weird period creatively. Then I came back full circle, and feel this record has more of my roots.

ME: While usually touring with Cinderella, was the solo record more something to work on as needed?

Tom: Yeah. My wife Savannah and I produced it with a friend of ours, Chuck Turner. It was done over a period of nine years. There was no label involved, and it really didn’t start off being a record. We were just sitting in our studio recording stuff on and off. Cinderella was still touring at the time, so we’d take long breaks from the album, go on tour, then come back and listen to it. We’d woken up one day, and found we had a record. So then, we found a label, and here we are!

ME: Would you consider this album another expression of your roots so far?

Tom: I think it encompasses those roots that I grew up on. Throughout those records with Cinderella, those roots were there, and they grew more from Long Cold Winter to Heartbreak Station. This is a continuation of that. I was the main singer-songwriter in Cinderella, and did a bit of guitar work. With this, though, I’ve been working with Savannah and other writers here in Nashville, so that was different in terms of how everything worked. It was cool, and a fun time! And there was no pressure making the record.

ME: Being in Nashville, do you find your environment especially collaborative?

Tom: Yeah! It’s a really cool community. There are amazing writers here, and we’ve worked with many people who are incredible players as well as songwriters. It’s great; it really is. So many talented and creative people here. This is also where we did the bonus tracks, with my touring band that I’ve been with for the past several years.

ME: As you’ve continued connecting with your roots, which artists would you say started it all for you?

Tom: My first taste of rock was while growing up in the 70s. I listened to a lot of Rolling Stones, Led Zeppelin, Janis Joplin and Rod Stewart. There were so many amazing bands I’d listen to as a kid in middle school and high school, when I wanted to be a musician. It was a great time to learn, and I had some great music to learn from. And I’ve delved into a lot of stuff they were into. I’ve gotten into blues and American roots music, so that’s been a great inspiration to me too.

ME: This new master of The Way Life Goes is by Richard Dodd. What is it about his style that brought the tracks out especially?

Tom: Richard has a way of making records sound very loud without compressing them. He uses a bit of EQ, but not too much, and just has a really good feel for what a track needs that makes them all feel cohesive.

ME: How were the bonus track sessions in Nashville?

Tom: They were great! This is the first time we recorded with the touring band. Their live chemistry really transferred well into the studio. The tracks we selected to record for the deluxe were a version of “A Little Help From My Friends,” which we’ve performed with the band from day one. Then we did a duet of “Nobody’s Fool” with Lzzy Hale. We chose these because they were things that came about while touring for the record, so it made sense to include them in this expanded edition.

We had Vance Powell producing, who worked at Southern Ground, which is an amazing studio, and we cut things fairly live, since we’ve recorded these songs for a number of years. We took the approach of just doing a handful of tracks with some editing and a few overdubs. Then we got into mixing, which takes a little longer (laughs), but we had a lot of fun recording with the new band, and there was just a great energy with Lzzy doing “Nobody’s Fool”.

ME: Also included in the deluxe is The Way Life’s Goin,’ which is the documentary around those sessions.

Tom: Yeah. Tammy Vega, who’s our official photographer, does a lot of video stuff. She came in and was like a fly on the wall, with multiple cameras, and really captured the sessions as if you’re there with us. She also does a few interviews, and it’s just a really cool piece that she did. She’s really, really talented.

ME: What can you tell me about Tammy Vega’s directing style, and how it added to the documentary?

Tom: The fly on the wall view for the documentary definitely gives you a taste of what it’s like recording in the studio, an understanding of creating the tracks, and the chemistry between our band members. It’s not something you often get to see, but it’s really cool!

Tom: I’d always like to say thank you (laughs). I’m grateful for them for listening to the music, coming to the shows, singing the songs, and I just feel incredibly blessed and fortunate for all of them.

I come from a family who is passionate about all things music. I learned to sing at an early age, and by 13, had my very own Fender Strat guitar. I tried my hardest at learning all that I could. Because I was born with cerebral palsy, I had to teach myself an adaptive playing style. I learned to write and record my own music, despite these difficulties. In college, I started making great use of my writing abilities by reviewing music, as well as copy editing. I guess it's best to stick with what you know, while welcoming a fair challenge at the same time.
Previous Interview with NHD
Next Marilyn Manson Injured at NYC Show, Tour Halted