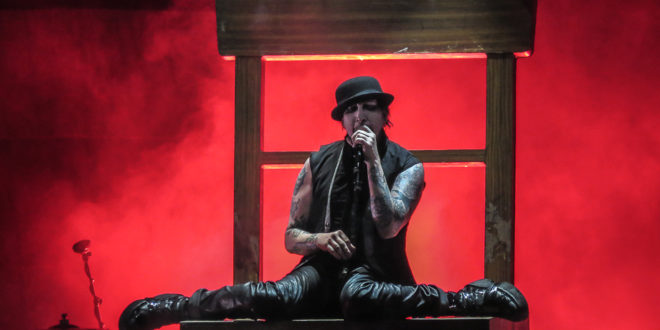 Shock rocker Marilyn Manson was injured on Saturday night when a large stage prop collapsed on top of Manson as he was attempting to climb the structure.

While performing his rendition of the Eurythmics classic “Sweet Dreams” Manson approached one of his stage props, a large structure with two prop handguns held together by a metal scaffolding and began to climb the structure. The prop quickly gave way, collapsing on top of Manson, injuring him, and stopping the show. Manson was rushed to a nearby hospital via ambulance where he was treated for his injuries.

While the severity of Manson’s injuries were not immediately known, it was later reported that Manson “should be fine.” The incident, however, was serious enough that Manson’s current “Heaven Upside Down” tour has been put on hold.

Lead guitarist Tyler Bates announced via Instagram on Sunday morning that the tour would be put on hold for the time being: “Well, the Upside Down tour is on pause for a minute. Heading home. Manson will be back in action soon. Heaven Upside Down is released October 6th, with an insane video to stoke the fire. See you soon!”

While the exact amount of shows that will be postponed is not immediately known, it does not sound like the entire tour is in jeopardy. The tour just began on Friday night and is currently scheduled to continue into late October.

Previous Interview: Cinderella’s Tom Keifer on solo album, ‘The Way Life Goes (Deluxe Edition out October 20!)’
Next Photos: A DAY TO REMEMBER at Self Help Fest in Orlando, FL 9/30/2017