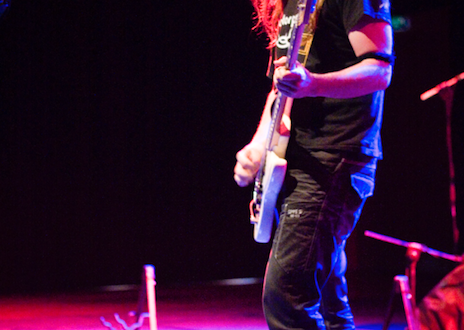 The Bass you didn’t know you needed

Roberto Fasciani might not be one of your mainstream names or tremendously famous bass players, but he is certainly on par, if not better than many around. Being born in 1979 in Italy and starting his musical carreer at a very young 15 years (that’s playing for over 20 years for you right there) playing drums in the beginning and forcefully having to switch to bass, something he now says was the right thing to do and a blessing.

He is proficient in many genres going from rock, classic and jazz to pop and even latin music, which is not something many players can say of themselves. Roberto has such a long list of collaborations, experiences and projects anyone would be surely blown away, and since no statement will be made without proof, let’s go through some of that list together, shall we?

Dogmate and Los Bastardos both happen to release albums this year; with the first having been released in April and the second one to be released so you know what to look for once you finish this article.

Roberto is not only a performer, he is also a teacher, a very progressive and special one, the kind of teacher that will ignite your passion for music instead of making you bored with the same old ways, giving his personalized courses in Octopus Music factory in Rome, Italy, with a very unique way to teach his students, what he calls “Rythmic Studies for Electric Bass”, in which he allows students to choose what courses to take and in what order, being divided in Solfége, Creation of Grooves and Fills and Original Scores. Alternatively, he is a private teacher as well as a youtuber. You can head over to his channel to find what he has to offer, and by all accounts do, you won’t be disappointed.

Fasciani is a truly powerhouse bass player, able to go from the breezy, effortless groove of improvisation with the ease of talent to the complexity of heavily worked pieces that require a great deal of expertise and dexterity, he has it all, it can be seen and felt that he and his equipment are one in the same when the time comes to perform or create, and he has said so himself that he has written songs for Los Bastardos so, is there anything he can’t do?

Extraordinaire would be a fitting addition to his condition of Bass Player, since his skill is nothing common.

Stephen Vicino is the founder of MusicExistence.com. He created this site to give talented musicians a voice and a way to be discovered.
@@svicino
Previous Interview: Dan Croll
Next Gallery: GBH at Brighton Music Hall, Allston, MA 9/10/17