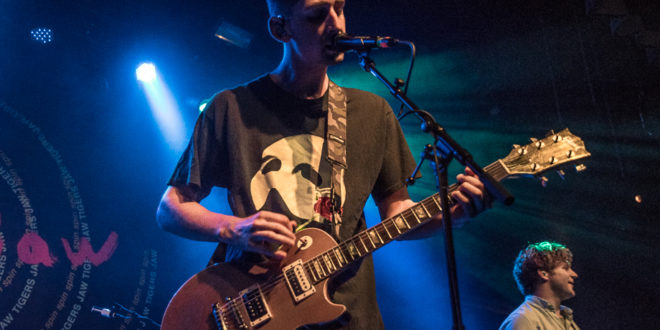 Tigers Jaw have shared the official music video for “Escape Plan,” the latest single from their new album, “spin” which was released earlier this year.

Tigers Jaw vocalist/guitarist Ben Walsh remarked, “’Escape Plan’ is a song about feeling stuck in your old ways, and trying to find the courage to make changes to your life. Earlier this year, when Josh Coll (director) and I were first talking about video concept ideas, I had to cancel a few calls because my grandfather passed away. That got him thinking about conversations he had with his grandfather before he passed. He remembered talking about technology and how our generation relies on it so much. The video focuses on the juxtaposition between these beautiful cinematic ‘real life’ scenes and the stark, sterile, inferior virtual reality that the characters seem to want to escape to. Hopefully it’s a reminder that the real world is beautiful and we should look up from our phones more often.”

The video, which was directed by Foxing’s Josh Coll along with John Komar, is a tragic portrayal of individuals relying on digital avatars to live their lives and form their experiences in a virtual reality. The viewer sees the loneliness and desires hiding by their headsets as their isolation from reality culminates in unbearable regret and heartache.

Recorded with producer and longtime collaborator Will Yip at Studio 4 in Conshohocken, PA, “spin” arrived to critical acclaim last month with The Fader declaring, “…the duo sounds fresh, honest, and self-aware.” NPR’s All Songs Considered applauded Tigers Jaw’s new material declaring the duo, “…thoughtful songwriters mining the sorrows of pop, particularly the thematic and sonic tumult of Fleetwood Mac,” while Pitchfork attested, “…Tigers Jaw remain above the fray but true to their roots.” Stereogum praised Tigers Jaw for, “…balancing the damp garage-rock of Pity Sex with the big, catchy sensibilities of early Paramore,” and UPROXX hailed spin as, “…an album that sounds bigger and more lush than anything the band had done previously.” “spin” is available at all DSPs with limited edition vinyl available at www.tigersjaw.com.

Comprised of Ben Walsh and Brianna Collins, Tigers Jaw has gripped listeners and press across the globe with their candid compositions and alluring harmonies. “spin” (stylized all lowercase) sees Walsh and Collins trading off lead vocals which glow with sincerity on this collection of incredibly understated indie-pop classics. Tracks such as “Guardian,” “June,” and “Escape Plan” shine on spin, which follows Tigers Jaw 2014 critically adored LP, Charmer. “…The sound of a band bravely moving forward,” declared Pitchfork while Stereogum applauded Walsh and Collins’, “…soul-baring lyrical honesty,” adding, “TIGERS JAW are a revelation…” Profoundly personal and vibrantly textured, spin exhibits Walsh and Collins’ remarkable ability to capture the sentiments and complexities of a moment through melody and introspection.

A Black Mile To The Surface TOUR 2017