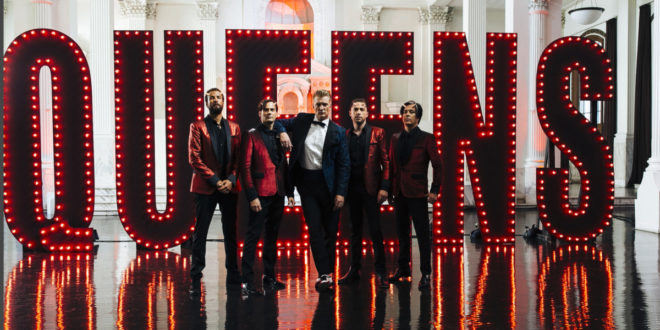 Queens of the Stone Age Set to Launch Villains Tour

Desert-rock group Queens of the Stone age are getting set to launch a lengthy North American headline tour in support of their new album “Villains” due out tomorrow, August 25th. Last week the band debuted a new music video for the latest single from the album.

You can watch the new video via Apple Music HERE

Dancing and headbanging are truly individualistic expressions of losing oneself fully in appreciation of music—who better to combine these things into a singular vision than someone who’s directed Madonna and Lady Gaga videos–and also happens to have been a member of Bathory?”—Joshua Homme

“The Way You Used To Do,” the recently released first single from Queens Of The Stone Age’s ominously approaching seventh album Villains, has been realized as a fever dream Satanic dance ritual extravaganza—featuring QOTSA founder and frontman Joshua Homme lighter on his feet and darker in his soul than ever before.

Conceived by Joshua Homme, directed by Jonas Akerlund and produced by Serial Pictures, “The Way You Used To Do,” somehow fit its multiple sets, wardrobe changes and intricate dance routines into one day of shooting August 8th in Los Angeles. Considering potential reactions to the sinister shuffle of “The Way We Used To Do” being translated into a panoramic soul-selling dance trip, Homme says “It’s our way of paying tribute to Cab Calloway and the film Hellzapoppin’. I fully realize that may be a little more than some are open to, and that’s perfectly fine with me. There’s the door. If some of the more close-minded are gently pruned, that just leaves more room on the dance floor for the open-minded ones to get loose. That’s been the spirit of Queens Of The Stone Age and the space we’ve worked to create from day one.”

The colossal Villains tour begins September 6th with a sold out show in Port Chester NY and will see the Queens playing directly before Foo Fighters and alongside Cage The Elephant, The Kills, Liam Gallagher, Japandroids and more at the massive Cal Jam 17 October 7th at Glen Helen Regional Park in San Bernadino, CA. Tickets for the headline dates—which feature support from Royal Blood–are available HERE