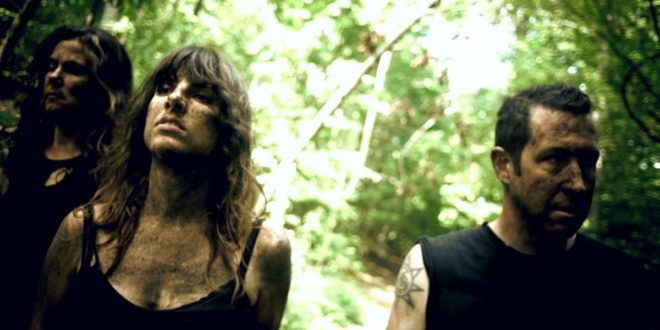 NYC’s female fronted punk-rock/grunge outfit Castle Black released their new EP Trapped Under All You Know today, after a premiere on AXS. With gritty female vocals backed by powerful but masterfully layered instrumentation, their music demands to be heard. Reminiscent of famous acts such as Sleater-Kinney, The Dead Weather, Hole, Savages, and Bikini Kill, Castle Black brings an infusion of genres and influences to their music, hurtling through social anthems and pure emotion.

The album kicks straight into gear, with the first track “Seeing In Blue” providing a driving anthem, full of lively drums, hooky melodies and demanding lyrics. The track premiered earlier this month via The Big Takeover. The album’s intriguing title, Trapped Under All You Know, comes as a line from the song “Blind Curtain”. “That line/title was decided upon because it best represented the themes of this album and the trajectory of the songs as ordered on the album,” shared vocalist/guitarist Leigh Celent.

Celent described the EP as a cohesive project, which provides a story experience when consumed in its entirety. Despite this purposeful intention, she also invites listeners to take away their own interpretations. “…while I may have written a song from a certain perspective, that doesn’t mean the words can’t be emblematic of other situations. There have been times that I’ve started writing a song about one thing, but by the time it was done, it was about something else, or a different perspective on the initial topic.”

In addition to their talented instrumentals, Castle Black utilizes vocal harmonies heavily throughout. “It’s been a running joke in the band, that if we want to add something outside of the three instruments, just ask Lisa to vocalize it! So, some of her vocal parts end up being these wordless vocals for this very reason and we like how it contributes to the overall vibe.”

Trapped Under All You Know represents a growth for the band in many ways, and is the first album to utilize a synthesizer, in the track “Broken Bright Star”. Celent said, “I wanted the start and end [of the track] to sound like someone was coming in and out of an alternate universe or something like that. The best way I could describe it was that I wanted a kind of static-y, helicopter, robotic sound. In fact, I think those are the exact words that I used to describe it to our engineer, Travis Harrison of Serious Business Records, who did some magical interpretations to nail it!”

The album art was designed by Tom Vasquez; familiar in working together, the band gave him full reign in his interpretation of their music and design for powerful and striking imagery. Celent said, “I think it’s cool sometimes to see how someone else interprets your songs and ideas, especially in another medium, and this was a great example of doing just that.”

The single “Blind Curtain” was first released as a limited edition split 7″ lathe cut record, by Leesta Vall Recordings in spring 2017. It was limited to 90 copies, made on a modified antique record cutting lathe from the 1950’s. A limited number of vinyl pressings are still available directly from the band.

Join Castle Black in celebrating with their EP release party at The Well in Brooklyn, NY on August 25. They’ll be performing live alongside Giftshop, Crowd the Airwaves and Lighteater. Trapped Under All You Know is now availble, on Bandcamp, iTunes and all major digital retailers.

Tags castle black EP tour Trapped Under All You Know